Have a look at the scene at last Friday’s “Global march to Jerusalem” demonstration in London. “From the river to the sea” calls for Israel’s annihilation. A Hezbollah flag (it wasn’t the only one). The Neturei Karta freak show. “Zionism, terrorism”. This is what deranged Israel hated looks like.

This woman too certainly got into the spirit. 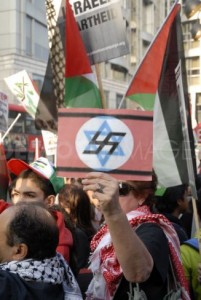 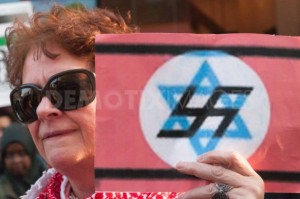 So did this man. Israel controls the media, don’t you know!

Here you will see more repulsive hatred, courtesy of RePressTV, a propaganda voice of the regime in Tehran. “Israel is a Nazi state!”

Such a scene would never be complete without Labour MP Jeremy Corbyn. Here he is. 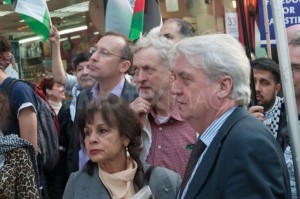 It seems Labour can’t even be bothered to answer criticism of such behaviour anymore.

I have written three times to Ed Miliband and other party leaders in a personal capacity. In July, I expressed my concern about my MP’s jaunt to Beirut [i.e. Corbyn], for Viva Palestina’s Summer University, alongside Palestinian hijacker Leila Khaled, and Azzam Tamimi, who has spoken of his desire to become a suicide bomber. No response.

I emailed expressing my alarm at Ken’s backing for Rahman. No response. And having been invited to a fundraising night for Ken at the “Shadow Lounge”, I wrote that he should spend less time there and more time working out how large his cheque to HMRC should be. No response.

And who is the man to Corbyn’s right in the photograph above?

The man Labour thinks should be this country’s Justice Minister.