In what must be the most disgusting use of ethnic-religious-race baiting in recent times, the campaign team of George Galloway’s soon to be failed bid to take Bradford West has published this piece of literature for the Muslims of Bradford West whom, with other voting-age citizens, go to the polls today. 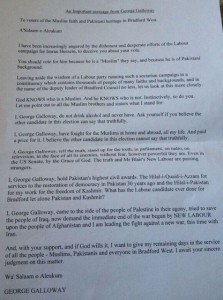 Here are the more bizarre bits of the letter:

God KNOWS who is a Muslim. And he KNOWS who is not. Instinctively, so do you. Let me point out to all the Muslim brothers and sisters what I stand for:

I, George Galloway, do not drink alcohol and never have. Ask yourself if you believe the other candidate in this election can say that truthfully.

I, George Galloway, have fought for the Muslims at home and abroad, all my life. And paid a price for it. I believe the other candidate in this election cannot say so truthfully.

Can anyone take this seriously? Is his campaign team really that stupid to think Muslims walk into the voting booth with a note on who drinks alcohol and who doesn’t?

As for his claim for fighting for Muslims ‘at home and abroad’, Galloway has been on the wrong side time and time again. His slavish love affair with the genocidal terrorist group Hamas, means Palestinians in the Gaza can wave goodbye to free and fair elections ever again, as well as a lethal price to pay if you don’t conform to the Islamist group’s virtues. Here’s a picture of Galloway giving money over to Hamas’ Ziad Zaza. Suffice to say, the Palestinians could not wish for a worse friend than Galloway.

Galloway’s support for, yet another genocidal psychopath, Saddam Hussain is most sickening. Saddam used weapons of mass destruction against his own people and the Kurds to the horror of the world. This is what Galloway said to Saddam Hussain in 1994:

When British and Allied forces were removing the Taliban from Afghanistan, he proclaimed ‘the Taliban are not the enemy for me’. Note, Physicians for Human Rights had this to say about the Taliban’s stance on women’s rights:

To PHR’s knowledge, no other regime in the world has methodically and violently forced half of its population into virtual house arrest, prohibiting them on pain of physical punishment.

Galloway’s pathological worship for tyranny came to a climax when in a radio broadcast, Galloway identified strongly with the Taliban and compared foreign forces to the Nazis:

They [Afghans] just don’t like foreign armies in their country. Me personally, Greg, I think that is a rather admirable trait.

I personally, if I had been alive, when Hitler was at the Channel ports, and thank God he didn’t, but if he had succeeded at crossing, there would have been lots of collaborators, yes, but I would not have been one of them. I would be the British equivalent of a Taliban. I would be trying to blow up the German soldiers that were occupying my country.

No dignified person wants a foreign army, tanks, airplanes, helicopters, soldiers roaming around their country and the Afghans are very dignified people. So you ask who we are fighting, Greg. If it was so simple that we only had to fight people with a membership card of the Taliban in their pocket, this war would have been over long ago. We’re actually fighting the Afghan people as a whole.

The final slap on the face for Muslims comes in the final paragraph:

And, with your support, if God wills it, I want to give my remaining days in the service of all the people – Muslims, Pakistanis and everyone in Bradford West. I await your sincere judgement on this matter.

The Muslim community in Britain is many things, but the one thing they are not is stupid. They can spot a hypocrite a mile off (a lesson learnt from Pakistani politics). Galloway might have been a forty-five minute suspension of judgement when Iranian propaganda TV station Press TV was around but only a fool could vote for this man. Far from the statesman he likes to think of himself, we shall remember Galloway for this.

It was the late Christopher Hitchens who summed up Galloway, perfectly:

“This man’s search for a tyrannical fatherland never ends. The Soviet Union’s let him down, Albania’s gone, the Red Army’s out of Afghanistan and Czechoslovakia, Saddam has been overthrown….(but) the hunt never ends!”

Update: To add to the hilarity. Have a look at what fellow religious-race baiter Salma Yaqoob has to say:

I don’t think she got today’s talking points.