[T]he mosque is now controlled by an Islamist organisation, the Muslim Association of Britain, which has been linked to the banned terror group, Hamas. A man who has acted as spokesman for the current leadership, Azzam Tamimi, is on record assupporting suicide bombings. One of the mosque’s current directors, Mohammed Sawalha, is described by the BBC as a former senior figure in Hamas who “is said to have masterminded much of Hamas’s political and military strategy” from his post in London.

In 2009 Mr Sawalha also signed the Istanbul Declaration which calls for attacks against the allies of Israel, which include the UK. The British Government interpreted it as calling for attacks on British troops.

The Finsbury Park mosque was gifted to the pro-Hamas leadership with the assistance of Bob Lambert, a police officer who had previously acted as an agent provocateur in environmentalist politics, during the course of which he fathered and abandoned a child. Bob Lambert then founded the European Muslim Research Centre with money from various Muslim Brotherhood front organisations.

Sawalha is a major player in the illegal funding of Hamas, which he coordinates from the United Kingdom. He should be investigated and, if appropriate, prosecuted for his activities. However, the political decision appears to have been taken to allow Hamas fundraising in this country, without hindrance. You can see some lovely pictures of Sawalha here. 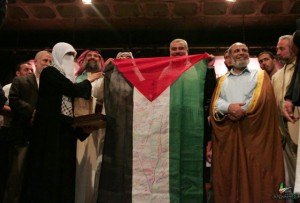 Here is a picture of Ken Livingstone at the Finsbury Park Mosque, with Hamas founder Mohammed Sawalha, in 2008. 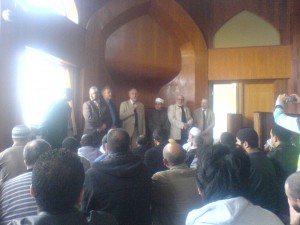 And this is what Ken Livingstone had to say, at the Hamas Mosque:

KEN LIVINGSTONE has promised to turn London into a “beacon” for the words of the Prophet Mohammed in a sermon at one of the capital’s most controversial mosques.

Mr Livingstone, Labour’s candidate for mayor of London, pledged to “educate the mass of Londoners” in Islam, saying:  “That will help to cement our city as a beacon that demonstrates the meaning of the words of the Prophet.” Mr Livingstone described Mohammed’s words in his last sermon as “an agenda for all humanity.”

He praised the Prophet’s last sermon, telling his audience: “I want to spend the next four years making sure that every non-Muslim in London knows and understands [its] words and message.”

Mohammed’s last sermon was a bit of a curate’s egg:

In his last sermon, delivered in the valley of Mount Arafat, near Mecca in 632 AD, the Prophet Mohammed attacked discrimination, saying that “a white has no superiority over a black nor a black has any superiority over white, except by piety and good action.” However, he also said that men had a right to ensure their wives “do not make friends with anyone of whom you do not approve.”

It would be a disaster for London and for the Labour Party if Ken Livingstone is re-elected. 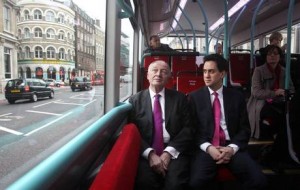