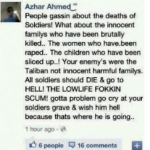 Yorkshire 19-year old Azhar Ahmed is facing charges of “racially aggravated public order offences” after he posted an angry Facebook status update about the reporting of the latest British Army fatalities in Afghanistan.

Ahmed’s sentiment (see pic) was not unsual. He starts off with the widely repeated complaint that deaths of British soldiers are given blanket coverage, while deaths of Afghans barely merit a mention. This is true, and hardly controversial.

Ahmed’s mistake, apparently, is to continue to vent his anger, and suggests that British soldiers should all die and go to hell. Strong language, but does it tip into incitement to violence? I think not. Nor, for that matter, do West Yorkshire police, who have not pursued Ahmed on this charge. Rather, they have sinisterly construed Ahmed’s comment as “racially aggravated”.

Serving British army soldiers do not count as an ethnicity. So why angry words about them could be seen as racially aggravated is a mystery. But perhaps unwittingly, those responsible for this charge have revealed something dark about the way the war in Afghanistan is now viewed.

Unconditional support for soldiers is now expected, even as we become increasingly unsure of what they’re doing out there. From the most ardent supporter of the war to the most strident critic, everyone claims to be acting in the interest of Our Brave Boys. This is now not a matter of politics, but loyalty. This question is compounded in Ahmed’s case, as the six soldiers killed were all from the local Yorkshire Regiment. Ahmed’s home town Dewsbury was also home of Britain’s best-known suicide bomber, Mohammad Sidique Khan, in the months before his attack on London. Suspicion of young Muslims voicing anti-troops opinions in the area is predictable.

But still the “racially aggravated” charge doesn’t stick, unless one is willing to buy into the notion that Afghanistan is part of an ethno-religious war between “Islam” and “the West”. This is the line that the likes of Anjem Choudary have been pushing for years. And now it seems West Yorkshire police agree.