As Hugo Chavez recovers in Cuba from another round of cancer surgery (after 12 years in power and billions of dollars in oil revenue to spend on medical training and equipment, he still doesn’t think Venezuelan doctors and hospitals are up to the job?), some of his thugs back in Venezuela are doing their best to violently intimidate his political opposition and the independent media.

The Committee to Protect Journalists reports:

Journalists with Globovisión, the country’s last remaining critical TV news station, were reporting on a rally by opposition presidential candidate Henrique Capriles Radonski in the Caracas neighborhood of San José de Cotiza. The march was interrupted by armed men who fired weapons in an apparent effort to break up the rally, Globovisión footage showed. Capriles, who is scheduled to face off against Chávez in the October 7 presidential election, was immediately whisked away to safety in a vehicle, news reports said.

After the Globovisión team filmed the shooting, armed men approached reporter Sasha Ackerman and cameraman Frank Fernández, the journalists said. Ackerman said the men wore red shirts that are associated with members of the pro-government United Socialist Party of Venezuela.

Fernández sought refuge inside a private home, but the men entered the house and stole his equipment at gunpoint, Globovisión reported. “We were threatened–both me and my photographer Frank Fernández–with pistols,” Ackerman told the station. “They stole our camera, microphone, and radios. We were threatened with guns. We had to turn over all of our equipment. They took our cassettes that had the images of the shooting.”

In a statement on Monday, Globovisión said, “These were not common criminals. These groups wore red shirts identifying them with a political tendency. More importantly, it was an armed and organized group that fired weapons against people.”

“This kind of censorship through the barrel of a gun does not bode well for journalists seeking to report on the crucial upcoming presidential campaign,” said Robert Mahoney, CPJ’s deputy director. “Authorities must demonstrate that they are not prepared to tolerate such outrageous intimidation of the press by thoroughly investigating this attack on Globovisión journalists.”

Despite the loss of the footage, the Globovisión website features a photo of a red-shirted Chavez supporter carrying a handgun: 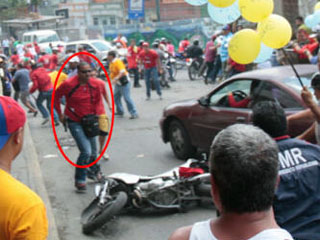