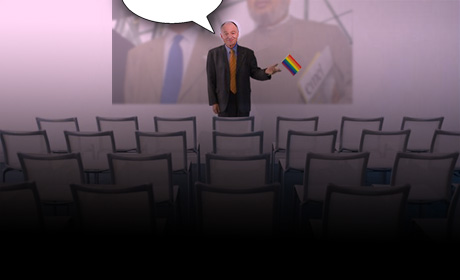 Andrew Gilligan reports that Ken Livingstone’s support from London’s gays is… not quite what he was hoping for:

Next Monday, the 12th, he was due to host a lavish fundraising drinks reception and dinner for gay Londoners at the Grand Connaught Rooms, with tickets ranging from £150 to £250 and tables from £1500 to £2500. As the publicity claims, “Ken Livingstone has always supported the gay community. Now it’s our turn to support him.”

Sadly, there don’t seem to have been enough supporters at these prices and the event  has now had to be dramatically downsized to a “complementary drink” at a gay club in Soho  – on the same night and at the same time – with tickets at just £10. (For £50 you can have your drink in an “exclusive themed bar booth.”)

You will still see Ken, though – it might be worth a tenner to ask him why he campaigned for the extremist-backed mayor of Tower Hamlets, Lutfur Rahman, who is currently trying to morally cleanse a gay pub, whose cabinet member for education shared a platform with an anti-gay campaign group, whose cabinet member for regeneration posted homophobic rhetoric on her social networking site and whose supporters shout animal noises at his gay opponents from the public gallery at council meetings.

But I think his position on gay issues has been coloured by a particular perspective. Gays were attractive to Ken at a time when to be gay was seen as counter-cultural. I suspect that supporting gays, for Ken, was a bit like sticking up for the IRA: something to annoy the Tories.

There’s still a battle to be had. But it says something that equality in marriage laws is now actually being pushed as a “Conservative” position by some prominent Christian Conservatives. The world has changed, hugely.

As far as Ken Livingstone is concerned, that means that gays are no longer seen as part of radical politics. Instead, my guess is that Ken Livingstone sees gays as rich and privileged. That’s why he’s now happy to ally himself with some of the worst  homophobic politics in Britain.

That is why, when prominent gay campaigners have raised proper concerns about vicious homophobia in Tower Hamlets, it has been Ken Livingstone’s supporters who have been deployed to attack them as racists and Islamophobes.

Put simply: you can’t do what Ken Livingstone has done, and hope to retain the support of more than a fraction of London’s gay population.

People are waking up to the real Ken Livingstone.