Omar Faruk is described on the website of the Tory peer, Lord Sheikh, as his “chief of staff“. He is the CEO of an organisation called EcoMuslim, of which his patron, Lord Sheikh is the Chair.

On 9 April, he is moderating an event called Muslim Question Time, at which the participants are as follows: 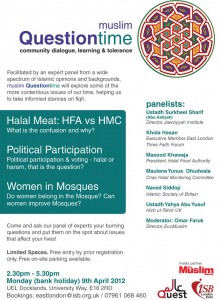 Abdul Kadir Barakatulla of the Islamic Sharia Council sits as a ‘judge’ on London’s Islamic Sharia Council, alongside the hate preacher, Haitham al Haddad. Its President is Maulana Abu Sayeed: a man who supports rape in marriage, and was accused by a Channel 4 documentary of having participated in genocide against Bangladeshis, during the War of Liberation. The Sharia Council itself has ruled that to question the wisdom of stoning “constitutes disbelief” in Islam, that women are rightly discriminated against by law, and that sexually abused women who refuse sex to their husband will be “cursed by angels”.

I am sure that Omar Faruk appreciates the huge embarrassment which his misjudgment will have caused to his patron, Lord Sheikh – and to the Tory Party – and will take immediate steps either to withdraw from this event, or to ensure that the invitations to these extremists are swiftly withdrawn.