She has reproduced Alan Hart’s recent article about the Holocaust, on Australians For Palestine, which claims that the Jews will be responsible for the next Holocaust against Jews.

Here is an excerpt from the article:

Is Holocaust II (shorthand for another great turning against the Jews) inevitable? Yes unless the Jews of Europe and America distance themselves from the Zionist monster before it’s too late to do so.

Here is the top of the article as it appears on Australians For Palestine: 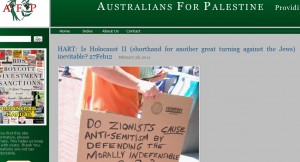