This Thursday, the Cordoba Foundation is holding an event:

An Introduction to Effective Lobbying & Campaigning

A second in a series of training manuals produced by The Cordoba Foundation, providing the knowledge, confidence and tools to engage with lobbyists, politicians, campaigns and people of influence to bring about change

AISHA ALVI (Barrister) – Won the legal right to wear the headscarf in school.

The Cordoba Foundation was correctly described by David Cameron as a “front for the Muslim Brotherhood“. Its CEO, Anas Altikriti has called the murder of coalition troops in Iraq “legitimate“. The Cordoba Foundation was given public money which it used to put on a debate on democracy involving the leader of Hizb ut Tahrir, and one of the founders of the terrorist group Al Muhajiroun. Cordoba also sponsored an CagePrisoners event in which the star speaker was the late Al Qaeda preacher, Anwar al-Awlaki.

It is therefore unsurprising to find that the other participants include Moazzam Begg, who was captured in Afghanistan where he was assisting his (now dead) friend Abu Rideh build schools for the children of Al Qaeda fighters. Begg’s CagePrisoners were outspoken supporters of the Al Qaeda preacher, Anwar Al Awlaki.

It is similarly predictable that Nabil Ahmed of the Federation of Student Islamic Societies (FOSIS) on the platform. FOSIS is presently promoting the hate preacher, Haitham Al Haddad. When objection is raised to those hate preachers that FOSIS parades through British universities, Ahmed simply lies about the documented extremism of the clerics, and actually defends them! That’s effective campaigning, folks.

No shock in the discovery that London Citizens’ Neil Jameson is on the platform too. Neil Jameson sees the function of his organisation as being to defend the vicious hate preachers of the East London Mosque and the  Islamic Forum Europe (IFE) activists whose politics they share.

And what convention of extremists and hatemongers would be complete without the support of Jeremy Corbyn MP?

Labour is, of course, completely unable to stop its own MPs rallying to support genocidal terrorist organisations, or appearing at conferences with Al Qaeda supporters. However, the Tories have typically been a little better at this than the other parties… 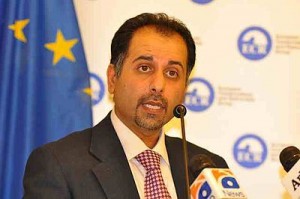 Sajjad Karim MEP is a former LibDem European Parliamentarian who is now the Tories’ Spokesman for Legal Affairs in the European Parliament. He was last in the news when a nasty mob of EDL activists demonstrated outside his house with placards stating “No to Islam”.

Looks as if he is a bit of a wildcard!

When you now click the Cordoba Foundation link, Sajjad Karim’s name has disappeared from the listing! 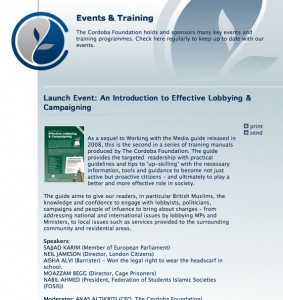 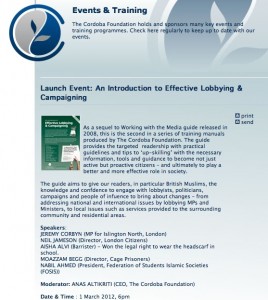 Fortunately, as this listing of a rally from 2006 in the Socialist Worker shows, Sajjad Karim MEP knows Anas Altikriti, and so will be able to call him up and give him a piece of his mind, for putting him on a platform with some of the worst that Britain’s Islamist scene has to offer:

Now, wouldn’t it be lovely if I’d been able to use this piece to poke fun at the Tories, for failing to keep their politicians off platforms of people who include some who, frankly, are little different from so many neo Nazis.

But unfortunately, Jeremy Corbyn MP is still on this platform.