This is a cross-post from Richard Millett

Where to begin with last night’s event at Middlesex University’s campus in Hendon, North West London, sponsored by Interpal. It was billed as a discussion on “Is Israel an Apartheid State?“, but became an evening of unadulterated Jew hate.

The atmosphere was threatening. The highly aggressive chairperson Nik Roberts kept insisting on calling security to remove both dissenters and people wanting to film. I could only take limited footage. Two “authorised” people did film, so clips should be arriving on youtube soon.

There was a Jewish contingent of possibly 30 out of some 150 in the audience and much of the rhetoric seemed to be aimed directly at us.

O’Keefe, who was on board the Mavi Marmara, compared Jews to both the Nazis and to the German people whom, he implies, as a whole collaborated with the Nazis. I have transcribed the final part of his speech below. After referring to “the Jewish people” O’Keefe uses “you” or “your” twelve times to personally direct his rhetoric at the Jews in the theatre. He admits his intent was to inflame:

Did they do enough to stop the Nazis? No, they didn’t. And what are the Jewish people doing right now? Are you doing enough to stop your racist apartheid genocidal state? (applause)

If you think that you are I beg to differ. You have a special obligation brought upon you just like the Nazis brought upon the decent Germans. Good luck to you because the way of Israel, the way of Palestine is the way of the world. And you can mouth at me all you want, good luck to you, because guess what, you are making enemies of all the people, not just me and the falsely accused anti-Semites.” (huge applause)

During the Q&A O’Keefe tried to fend off an accusation that he had embezzled funds from the pro-Palestinian movement. He claimed he never has more than £100 in his bank account and has never owned a property (see clip 1 below). He went on to claim that Israel was responsible for 9/11 (clip 2).

And on suicide bombings he said:

“What the so-called suicide bombings did was force the world by shocking the conscience of humanity to pay attention, and the Palestinians have paid a huge price for some within their ranks carrying out those tactics.”

Ghada Karmi described Israel as a “gangster state” and gave us her definition of who is Jew:

“Is it somebody who practices the Jewish religion? They have never been able to find an agreed position.

At the beginning they talked about ‘a person born of a Jewish mother and/or a person who had been converted according to the orthodox system’. That’s it, nobody else.

Over time, when they saw that they were drying up, they started to make it much more elastic. So, now, anybody who has a Jewish parent or a Jewish grandparent is now Jewish.

Not only that. Among the million immigrants from Soviet Russia how many of you know that 40% of these people are not Jewish? They are not Jews! They go to Greek and Russian Orthodox Churches in Israel, ok? 40%.

Not only that. They brought in the Ethiopean Jews. They went fishing for Jews in Peru. They’ve gone to India. Anything. You know what the main purpose of it is? It’s that they should be non-Arab. Non-Arab. You can be any sort of person. You can call yourself ‘a Jew’. As long as you’re not an Arab, it’s alright.”

She called for the end of a majority Jewish state (Clip 3) and said the Israel treats the Palestinians as “a sub-human species” so when it kills them it “doesn’t have the same impact, as they are already sub-human” and finished off claiming that “if an Ethiopean gives blood to an Israeli blood bank people have objected because they don’t want a transfusion from an Ethiopean”.

Tonge, who describes herself as an “ethnic Christian” (see clip 4), started by telling the audience to beware of the Israel lobby because “once they have decided to go for you, they will go for you. I bear the scars” (clip 5). She finished by saying that “Israel is not going to be there forever” and warned that eventually Israel “will lose its support and then they will reap what they have sown.” (Clip 3)

Who are “they” and what does she imply will happen to them?

Another chilling threat to Jews from this British Parliamentarian. 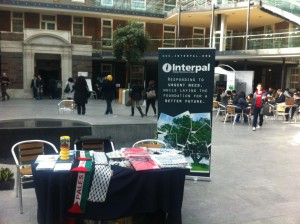 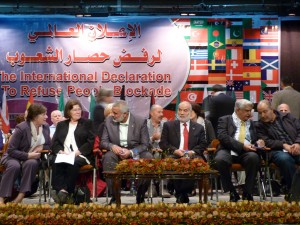 Ken O’Keefe is one of the authors on the new website of the antisemite and promoter of Holocaust denial, Gilad Atzmon: deLiberation, where the other authors are a collection of racists, Nazis and cranks:

You’ll note that he rubs shoulders with Francis Clarke Lowes, expelled from the Palestine Solidarity Campaign (with 20% supporting his continuing membership) for enthusiastically pushing Holocaust denial.