I’ve always thought that Haaretz opinion editorials are proof, if you required more than the empirical studies done, that Israel is a democracy. The vile contempt that most of the left-of-centre columnists and writers show for Israel is truly a tribute to the cornerstone attribute of any civilised society: freedom of speech.

The news that eight Palestinian children had died in a bus crash is a tragedy to any decent-minded person. A sad loss of life believed to be because of adverse driving conditions.

For Gideon Levy, rather than sharing in the tragedy of the day’s events, it was a golden opportunity to stare into his crystal ball. Levy’s entire article is a crass condemnation of Israeli society’s supposed reaction to the bus crash.

In what must be the investigative skills of a teenager, Levy rages against crazies on Facebook and Twitter using the crash to spew their own bigotry. He writes:

He has a point. But bigoted people will, not surprisingly, be bigoted on open platforms such as social networks. But that’s just the starter. Levy’s greater condemnation is for wider Israeli society:

No longer can all this be waved away with the argument that these were the responses of a handful of crazies that do not reflect the whole. Perhaps we should also give thanks for the democracy that allows these responses to be published, and to flood public awareness. But it must be recognized that the sentiment they express is common and that it runs deep in Israeli society.

Enemies, a hate story. In the past few years, anti-Arab hatred and racism have reached monstrous proportions and are no longer restricted to a negligible minority. Many people dare to express it, and many more agree with them. All the discriminatory, separatist laws of the past few years are an authentic expression of that hatred. 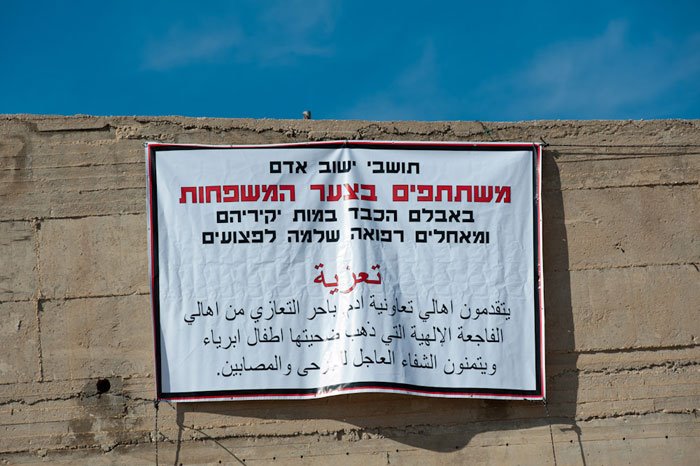 Some Israelis from the nearby settlement hung this sign over the site of a bus crash that killed 8 Palestinian children. It reads (in Hebrew and then Arabic): “The residents of the (nearby) Adam settlement share in the sorrow of the families, in their deep grief over the death of their loved ones and wish a speedy recovery to the injured.”

In a heartwarming show of solidarity, settlers have erected a sign over the crash site expressing their sadness and grief. This isn’t the product of some cosmopolitian Tel Aviv human rights group but of one group of settlers sharing their grief with the Palestinian people. If you ever needed evidence that the settler community aren’t a bunch of rabid, blood-lust devils then here it is.