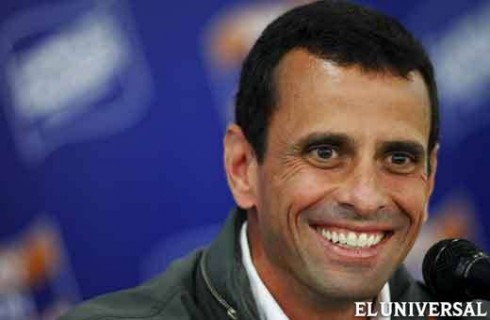 It appears that Hugo Chavez will have a formidable opponent when he seeks yet another term as president of Venezuela in October.

For years, Venezuela’s opposition to Hugo Chávez looked like a bit of a joke. Thanks to unsuccessful attempts to unseat the president (including general strikes, an electoral boycott, and even a coup),  it deservedly earned characterizations like “disorganized,” “leaderless,” and “self-defeating.”

On Sunday, Venezuela’s opposition finally got its act together. In a national primary that drew more than 2.9 million voters to the polls (double what was expected), Miranda Governor Henrique Capriles was chosen as the opposition’s standard-bearer and leader…

Apparently for the regime, the turnout was so embarrassingly high that Chavistas are claiming the totals were inflated– even though the government’s own election board oversaw the voting.

Capriles’s victory over four other candidates was impressive: at 62% of the opposition vote, he doubled his nearest rival’s tally, earning a strong claim to be the opposition’s consensus candidate. Yet the task he faces is a daunting one, for he will have to face the popular, silver tongued demagogue Chávez in October’s presidential elections.

From day one, Capriles has run a general-election campaign, ignoring the more radical elements within the opposition movement. His main message to the voters: “I am electable because I can make inroads with swing voters who once supported Hugo Chávez but who are now looking for an alternative and long for an end to political strife. I am here to work, not to talk or fight.”

Capriles’s intense message discipline throughout the primary belies a thoughtful approach to the campaign. Realizing that Venezuelans value some of the Bolivarian Revolution’s achievements, he tailored his message around reconciliation and inclusion. While vowing to maintain the popular aspects of the government’s policies, he promises an end to the bitter partisan politics that have plagued this country for the past 13 years.

According to Reuters: “Capriles, 39, won praise for his handling of last year’s floods, when he waded neck-deep in water to help rescue efforts. He is known for tramping through shantytowns in jeans and T-shirt to talk to locals.

“Capriles says he would emulate Brazil’s ‘modern-left’ model of economic and social policies if elected.”

This is the sort of thing that will make it hard for the Chavistas to portray him as a lackey of Venezuela’s privileged elite.

The focus of his program is education, one of several areas where Hugo Chávez appears vulnerable. Capriles views it as the key to creating jobs and lowering daunting levels of violence that have made Venezuela one of the most dangerous places in the hemisphere.

Capriles won in a landslide. He won across all income levels, and triumphed in every state except for Zulia, the home state of his closest rival, Governor Pablo Pérez.

…Hugo Chávez, already in campaign mode, has repeatedly said that none of the other candidates can handle the presidency, and claims that only his victory can ensure stability.

He might have a point. He has created militias loyal only to his political project, and there is no telling how they would respond to a defeat at the polls. As an ex-army officer he also retains a sizeable following among the military proper (and especially among the officers he’s promoted to key positions). Less ideological members in the military brass might be skeptical of Capriles’s ability to hold the factions at bay and ensure the peace. Finally, the uncertainty surrounding Chávez’s cancer — and his possible successor — might prompt one of these groups to try and seize power. It is noteworthy that one of the first groups Capriles mentioned in Sunday’s victory speech was the Armed Forces.

Capriles faces a monumental task. Even putting aside Chávez’s charisma, his war chest is basically the state itself. He has free rein to dip into the public coffers for campaigning and, with oil prices at over $100 a barrel, there is no way Capriles can come close to matching his spending power. And given the president’s absolute control over Venezuela’s airwaves, there is no way to match his media access either.

In spite of all this, recent head-to-head polls put Capriles within striking distance of the incumbent.

For all his structural advantages, Hugo Chávez now has something he hasn’t had in years: an organized opposition, headed by a legitimate, disciplined leader.