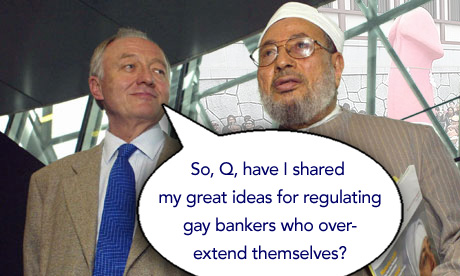 Is Ken Livingstone going senile? It must be the question on everyone’s lips.

Why is Ken Livingstone suddenly fixated on gay men? Is it because he feels betrayed by the gay community’s objection to his hugging of murderous homophobe Doctor Yusuf Qaradawi? The Qaradawi-affair is an unerasable stain on his career and will -hopefully – prevent Livingstone and his gang of far-Left fellow travellers from winning back City Hall.

Of course, Livingstone has never apologised for anything – when in a hole, his strategy has always been not to stop digging, but to simply keep digging deeper and deeper until everyone assumes the hole was always meant to be there and perhaps even it’s a very good idea to have a hole.

So, after his stupid and offensive “riddled with gays” comment, I suppose we should have expected Ken to just say something even more outrageous.

He has now obliged.

After his first odd turn of phrase, some in the gay community jumped in to defend him, including Peter Tatchell, whom Livingstone has tried his best to destroy. Tatchell either has a gracious heart or madness. Perhaps both. Livingstone will never return the favour. They argued that Livingstone’s remarks about the Tories being “riddled with gays” was an, albeit clumsy, attack of “Tory hypocrisy”. Perhaps, but of course today the Tories have more ‘out’ gay MPs than the other parties put together. Others expressed concern over the use of the world “riddled” which is suggestive of disease.

In any event, Ken could have weathered the storm.

Instead last week in a discussion about London as a financial centre, he quipped that Dubai could not challenge London since gay bankers would “have their penises cut off”. Now, I’m sure some will rush to his defence again and say he was trying to raise the issue of the treatment of gay people in the Middle East, but of course this won’t fly very easily since he, well you know, hosted Qaradawi, the chief scholar providing theological justification for executing gays. Also, his apparent loathing for Dubai’s emasculation of gay people hasn’t stopped him offering city planning advice to them in the past. But that’s not really what interests me.

Far more revealing is this: Why mention gay people at all? Is it some kind of Tourettes syndrome he’s suffering?

The issue was banking. Why associate gays with banking. Why not mention the status of women, or the prevalent racism in Dubai? Are gay people disproportionately represented in the banking industry? Perhaps it’s some sort of subconscious trope he harbours about all gay people being rich, male and white. After all, the week before he had said bankers’ bonuses were “penis extentions”.  Can this explain his weird fantasy about gay men having their penises cut off?

Nevertheless, the punishment for homosexuality throughout the Islamic world includes death by hanging or beheading, lashes or imprisonment, but nowhere does it include the cutting off of the penis. Why on earth would this image enter Ken’s mind if he were attempting – even as a strange non-sequitur – to make a serious point about mistreatment of gay people?

Has Ken’s mind been weakened by senility and he can no longer guard his language and control his tongue. He’s always struggled to do so, but now frailty seems to have removed the last line of self-censorship between his true prejudices and the turn of political phrase that might once have satisfied his defenders.