This is a cross-post from Obliged to Offend 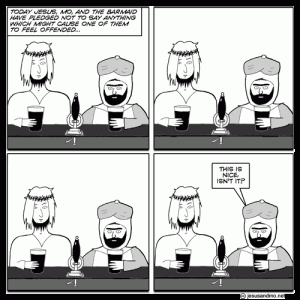 Aside from the drinking, experimentation with drugs and casual sex, university life has traditionally been a place where young people have cut their teeth amidst a wealth of new and exciting ideas. Not every university student is lucky in this respect, of course – at the former poly I attended the closest I ever got to political activism was throwing rotten vegetables over the garden wall at our affluent neighbours – but as a rule, university students tend to leave with a better understanding of a number of political trains of thought than they had before they went.

The latest idea to be popularised at university, however, is not really a political idea as such, but rather a sensibility. It is not taught in lectures, nor as far as I am aware does it have any social societies to its name. It is backed, however, by a great number of the political activists universities up and down the country are famous for.

I am talking, of course, about the idea that students require protection against being “offended”.

Lots of things, such as racism, homophobia and sexism, really are offensive. No one should be in any doubt about that. Nor am I in any sense trying to downplay the feelings of offense people feel from time to time about a wide range of things. Who, apart from an ice-cold sociopath, could never feel offended?

What I am referring to, rather, is the increasingly popular notion that a person has some sort of right not to be offended; to have their ears stuffed with cotton wool whenever anyone says anything that might bring their worldview crashing to the floor like a house of playing cards.

There have always been some who have sought to use force to silence those they perceive as blasphemers and critics, of course. Fortunately, our relatively free society has for the most part pushed such people to the margins, and it is no longer possible to be dragged out of bed in the middle of the night over a poorly timed joke about a beardy chap (secular or religious).

It seems to have been learnt in some quarters, however, that if your feelings are hurt you again no longer have to actually bother challenging the argument of a rival at all, but can instead cling to the irrefutable and subjective notion of “deeply held belief” to silence your critics.

An example of this made the news recently when the President of the Atheist, Secularist and Humanist society at the prestigious University College London (UCL) had to step down after a furore erupted over the publication of a cartoon featuring Jesus and Mohammed having a beer.

The strangest thing about the whole affair was not the behaviour of the devout, which was depressingly predictable, but rather the reaction of much of the student political left – historically the very people supposed to be the defenders of free expression. The only Left group that put out anything defending free expression was the Alliance for Workers’ Liberty, of which I am a member.

In response to the “incident” (or the publication of a couple of scribbled pictures, whichever you think most appropriate), the LSESU Socialist Workers Society put up posters around campus that included the following pitiful statement:

“The Atheist Society’s efforts to publish inflammatory “satirical” cartoons in a deliberate attempt to offend Muslims serve to highlight a festering undercurrent of racism.”

You may notice that they could not bring themselves to say outright that the cartoons were racist (because they were not), but instead sought deliberately to confuse the matter by saying the pictures “highlighted a festering undercurrent of racism”.

When did the student Left become so conservative?