A couple of days ago I blogged about the London School of Economics Students’ Union cancelling a meeting that was to addressed by the radical Islamist preacher, Haitham Al Haddad. I also mentioned that he was due to address an event at East London Mosque on 18 March organised by the Lewisham Islamic Centre.

I now understand that Haitham Al Haddad will no longer be attending this event as it appears his invitation to speak has been withdrawn.

I hope that this is so. 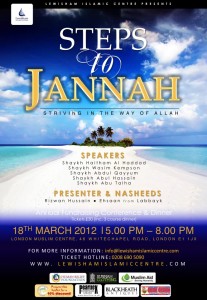 The East London Mosque periodically attempts to address the – accurate  – perception that it is the home of extremist, bigots and hate preachers. For a few months, hate preacher events will take place at associated venues. A statement of opposition to racism will be put up on its website. Then, after the fuss has died down, it is back to the old business of poisoning the East End.

Can the ELM/LMC reform itself? Can they actually bring an end to this spewing of hatred into the local community?

The ELM/LMC is run by a clique that is associated with the politics of the far Right South Asian Islamist party, Jamaat-e-Islami. However, there are most certainly those in the ELM who are more interested in running a religious institution and community centre, and in being acknowledged as respectable “community leaders”. There’s a tension between the two goals.

The ELM/LMC has got away with promoting hatemongers for a long time. This dismal state of affairs has been the product of a single failure. Few have criticised them. They’ve not been held to account. And so, fairly, they have believed that they can have their cake and eat it.

Those days are now coming to an end.

Rather than face public criticism from Hope not Hate, Britain’s leading anti-racist organisation, the ELM/LMC has shown that they’re prepared to drop a man who is  a close associate of their Imam.

Haitham Al Haddad is far from the only hate preacher at the ELM. However, if they’re prepared to bar their doors to him, then they should be prepared to ban a host of other speakers.

We will be watching. Closely.