The Guardian has published a helpful list of Islamist activists connected to extremist political parties, and those on the far Left (and their hangers on) who have made common cause.

There are few names here which I think would surprise anybody:

Nominally, this group has formed to carry out an inquiry into the “anti-Islam press”.

A number of signatories are  high profile supporters of genocidal racist terrorist organisations, and have published and disseminated racist  material themselves.

Sunny Hundal is behaving very oddly over his signature of this letter! Sunny is apparently helping put this bunfight together:

Oh, but now Sunny is being ribbed about the extremist politics of his co-signatories. But he is valiantly fighting back. 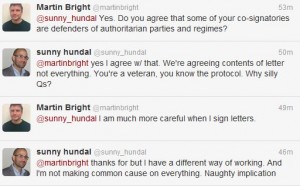 This appears to be Sunny’s killer argument – that one shouldn’t refuse to sign a letter “against persecution of whites” if the BNP’s Nick Griffin had also signed it. 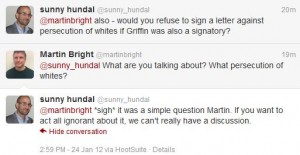 And now he seems to be arguing that merely because he signs a letter, he doesn’t mean that he has endorsed it.

It is clear thinking like this which has made Sunny one of the most influential bloggers in the United Kingdom.

Now people are beginning to get confused.