Shmuley Boteach is something of a ‘media rabbi’: a product of the Chabad organisation, he has written books on sex and articles about “my friend Michael Jackson”. He seems amiable enough, although a little silly.

Kosher Jesus is the true story of Jesus’ Jewish life – culled from early Christian and Jewish sources – that portrays Jesus as a Torah-observant teacher who instructed his followers to keep every letter of the Law, whose teachings quoted extensively from the Bible and rabbinical writings, who fought Roman paganism and persecution of the Jewish people, and was killed by Pontius Pilate for his rebellion against Rome, the Jews having had nothing whatsoever to do with his murder.

Though a revolutionary theory, Publisher’s Weekly has just glowingly reviewed the book as an “informed and cogent primer on Jesus of Nazareth…. a brave stab at re-evaluating Jesus through an intensive look at the New Testament and historical documents… and a well-researched analysis that will certainly reopen intra-faith and interfaith dialogue.”

Boteach is wrong to describe this thesis as revolutionary. The Jewishness of Jesus has been characterised as the great theological re-discovery of the last 50 years or so. Geza Vermes has written extensively and learnedly on this subject. If you’re interested, he has an extremely good piece in last month’s Standpoint that is well worth reading.

Nevertheless, his book has been badly received by another Chabad rabbi: Rabbi Yitzchok Wolf. Wolf believes that discussing the Jewish nature of Jesus’ teachings will lead Jews to convert to Christianity. Boteach, by contrast, argues that its effect is quite the opposite, and that his thesis demonstrates “why Jesus could not have been divine or the Jewish Messiah. The book grants immunity from missionary encroachment.”

Wolf has two pieces up, one here, and the other on the Chabad Lubavitch Community News Service, COLLIVE. The first article is silly enough, and is characterised by its use of the letter “J” to denote “Jesus”, as if the name had some sort of magical power. The second goes a little further:

Boteach’s latest book is apikorsus and must be treated as such. If Boteach had any decency, he would disavow himself from kehillas Chabad as well as from Yiddishkeit in general. When one writes claiming to pen his writings as an Orthodox Rabbi, and it can mislead the ignorant and the vulnerable, heaven forbid, he must be ostracized for their sake alone. It’s not the derech of Chabad to eject their fellow jew, yet there are those rare times when it appears as an obligation to do just that.

I just can’t tell you how much I hate this sort of religiously inspired stupidness. However, what happened next is particularly depressing. First, Boteach asked for a ‘right of reply’ which was granted. Shortly thereafter, his article was removed:

“I removed your response… [because] its contents were not on par with our editorial standards, being that we are a frum [Orthodox] website. Parents do not want their children to be reading a discussion about J[esus] or reading quotes from J! …It goes without saying that impressionable Jewish children should not be reading about this topic.”

Thereafter, following Boteach’s complaint, Wolf’s attack on him was also removed from the COLLIVE website.  Then it was put up again. The comments on Wolf’s original article were extreme and hateful and described Boteach as an agent of Satan. They included both threats ranging from crucifixion (!) to having “dirty diapers” thrown at his house.

Why, I wonder, might the Lubavitch feel so strongly about one of their members writing about the deeply Jewish nature of the martyred Jesus: whether or not he regarded himself as the Messiah or indeed divine. Why does this subject elicit such fury from some of the Lubavitch? 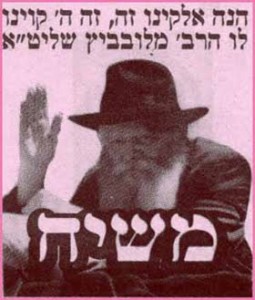