Gil Kaffash is the former Secretary of Camden PSC, and appears to support historical revisionism regarding the Holocaust. For this reason she was asked to resign from the PSC. However, she is still a PSC member, and will bring this motion to the national AGM:

Motion 10: PSC has been under a great deal of pressure from accusations of antisemitism. Members have also been expelled for anti-Jewish prejudice and other members have been criticised on those grounds In the light of these events, which demonstrate the importance of agreement on the meaning of racism, anti-Jewish prejudice and Islamophobia as used in the Constitution. Conference resolves to adopt the following definition: Racism, anti-Jewish prejudice and Islamophobia shall be defined as the belief that inherent different traits in human racial groups or Jews or Muslims respectively, both as individuals and collectively, justify discrimination. These terms apply especially to the practice or advocacy of discrimination of a pernicious nature ie which harms these groups.

As you’ll see, this definition would mean that racism is not racism unless actually believe you have to discriminate against racial groups. According to this definition, it is not racist to deny the Holocaust (all elderly Jews = liars) or to believe that Jews bake bread with the blood of Christian children.

The definition proposed by Kaffash is rather eccentric. She uses a very broad term “anti-Jewish prejudice” rather than “antisemitism”, and then gives prejudice itself a very narrow definition.

Surprisingly, the motion is seconded by Ruth Tenne. 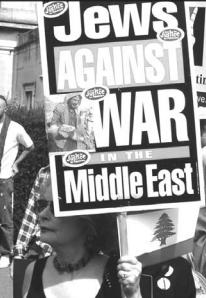 Who is Ruth Tenne?

This is her bio on PULSE Media (itself a cesspit of antisemitism):

Ruth Tenne was born and bought up in Israel by staunch Zionist parents who were among the founders of the socialist Kibbutzim’s movement. She served as a conscript in the Israeli army during the 1956 Sinai War and as a reservist in the 1967 Six Days War. She is currently an active member of the Palestinian Solidarity Campaign (PSC), Camden- Abu Dis Friendship Association (CADFA), and Jews for Justice for Palestinians (JFJFP).

She is a J-BIG member, writing:

She signed the founding J-BIG statement, and has previously featured on the J-BIG (Jews for Boycotting Israeli Goods) website, under “past activities”:

She comments on the Guardian:

Yes,I am the Ruth Tenne who was one of the signatories of the founding statement by Jews for Boycotting Israeli Goods (J-BIG) – a group which was established a year ago and was welcomed by thousands (if not millions) in the West who believe that there is a need for a direct grassroots action in order to bear a genuine pressure on the State of Israel.

As a member of J-Big, she has co-signed a letter with Tony Greenstein, Mike Cushman, Deborah Fink and other Jewish anti-Zionists, published in the Guardian. Tenne has written a guest post for Jews Sans Frontieres dismissing the Jewish exodus in 1948 as a Zionist policy designed to strengthen Israel.

Now she finds herself on the other side of a debate about racism, to Tony Greenstein. For this reason, Greenstein appears ashamed of Tenne, commenting recently on Harry’s Place (3 Jan 2012, 02:16am):

Ruth Tenne is NOT a member of J-Big.

Motion 10 is proposed by Gill Kaffash, ex-Secretary of Camden PSC. She wrote to me earlier this year asking for proof that Gilad Atzmon was anti-Semitic. When I provided it she became mysteriously quiet and tried to divert it onto issues of disability. The reason is that she is a died-in-the-wool anti-Semite and supporter of holocaust denier Paul Eisen.

In My Life as a holocaust denier Paul Eisen describes the torments he went through when he became a holocaust denier. Most people ‘simply remained silent but there were some who openly and repeatedly demonstrated their solidarity e.g. Dan McGowan, Henry Herskovitz, Gilad Atzmon, Sarah Gillespie, Israel Shamir, Francis Clark-Lowes, Gill Kaffash…’

Kaffash’s motion is, in the words of the Marquess of Salisbury when admonishing Ian McLeod‘too clever by half’. She has devised a definition of racism that conveniently omits holocaust denial! According to her racism is something biological that results in practical discrimination. Unfortunately not only does this exclude Islamaphobia, which is primarily cultural not biological, but would exclude the ‘n’ word and other forms of racial abuse. Gill Kaffash’s ‘definition’ of racism makes about as much sense as the discredited Working Definition on anti-Semitism that the EUMC temporarily adopted before its successor the Fundamental Rights Agency dropped it. And it is about as useful!