“I am extremely concerned about Gilad Atzmon’s presence at what should be a celebration of music and art. His previously stated views are extremely offensive and the organisers of the festival were wrong to invite him. It is not too late for them to rescind the invitation – and I would urge them to do so.” He added that allowing Atzmon to perform would be a “stain” on the city’s “long and proud tradition of fighting discrimination and extremism of all kinds”.

Just a little background on the PSC’s position.

We have discussed the matter with the Palestine Solidarity Campaign and are satisfied that PSC have no boycott of Gilad Atzmon or events that he is involved in.

In response, the PSC tweeted:

PSC has been misrepresented by Raise Your Banners.@PSCupdates does not work with Gilad Atzmon.

RYB either exaggerated the PSC position, spoke to an individual who did not speak for the organisation or simply made the whole PSC claim up

It is interesting to watch the way that the PSC has dealt with this controversy. Remember, they responded to our revelation of the links on PSC websites and endorsement by prominent local PSC activists by adding this paragraph to their “Aims” statement:

The Palestine Solidarity Campaign exists to build a mass solidarity movement on Palestine. It is founded on principles of justice, human rights, and opposition to all forms of racism.

Any expression of racism or intolerance, or attempts to deny or minimise the Holocaust have no place in our movement. Such sentiments are abhorrent in their own right and can only detract from the building of a strong movement in support of the fundamental rights of the Palestinian people.

At the same time, certain of their local activists were encouraged to ‘step down’. For example, the former secretary of Camden PSC, Gill Kaffash – who  the Holocaust denier Paul Eisen lists as one of his supporters  – has resigned from her post.

Gill Kaffash makes a telling point, that explains the uncomfortable position that the national PSC finds itself in. Objecting to the PSC’s opposition to antisemitism, she says:

How long do you think it will be until the Jewish Chronicle demands that PSC unreservedly condemn Hamas? And how long before PSC complies? After all, Hamas is obviously ant-semitic – most of the people it attacks are Jewish.

It is a real problem for the PSC. Having run the line that antisemitism is a spectre, dishonestly raised by Jews, to silence criticism of Israel, it may be difficult for the PSC to get the message across: that antisemitism exists, is bad and should be opposed. Similarly, as Gill Kaffash points out, if you’re silent about the genocidal antisemitism of Hamas and its supporters, then why shouldn’t the PSC speak out against it.

The fact is: the PSC can and should oppose racism directed at Jews. Solidarity with Palestinians, and support for a Palestinian state shouldn’t be incompatible with opposition to Hamas and antisemitism.

However, such a position would clearly create a tension between the racist groups and individuals that the PSC supports and promotes, their repeated invective (and legal threats) against anybody who opposes those racists, and perhaps most of all, the attitudes of many of their prominent supporters and activists.

This is particularly true of the PSC’s local branches.

Karl Dallas is a Bradford PSC organiser, who is also involved with Raise Your Banners. He tweeted in support of Gilad Atzmon:

He followed up with an attack on the anti-Zionist campaigner and singer Leon Rosselson:

It seems Leon Rosselson urged others to boycott RYB because Atzmon was playing. So poison spreads. Who is not the solution is the problem.

Similarly, this poster shows that Gilad Atzmon was recently hosted by Exeter PSC: 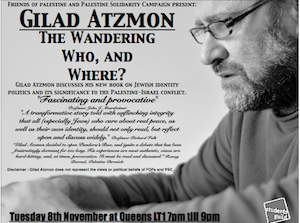 Gilad Atzmon also believes he was hosted by the Exeter PSC. He wrote earlier this month:

Tuesday 8th November at Queens LT1 7pm till 9pm, Friends of palestine and Palestine Solidarity Campaign present: Gilad Atzmon The Wandering Who, and Where

So, there is clearly a bit of a problem with support for anti-Jewish racism within the PSC. If they’re serious about tackling it, they need to think long and hard about how opposition to Israeli policies and support for a Palestinian state can be conducted in a manner which doesn’t involve attacking Jews and anti-racists, or supporting genocidal antisemites.

If they don’t, they can’t really be surprised if their membership rebels against them.