From Terry Glavin’s book Come from the Shadows: The Long and Lonely Struggle for Peace in Afghanistan, pages 121-122:

In Afghanistan, if you’re a girl, to play soccer is to commit a revolutionary act. It’s been grand, but rough going for the Rasoul sisters. In their efforts to add girls’ teams to the Afghan soccer federation, they kept getting turned down in their bids to rent fields. Or they’d find a soccer field that would allow girls to play, only to be harassed and bullied by local men. The sisters shifted tactics. If Kabulis weren’t ready for local girls’ soccer teams, they might be able to get their heads around a boy’s team coached by Yasameen. It worked, and the Kabul Tornadoes was born. “Now there are boys who are coming to the games, and they are very happy. They are coming to be on my team. They listen to me,” Yasameen had told me. “They always come to their practice, and they are actually very good.” It was a start.

The Kabul soccer stadium where the Rasoul sisters and their teammates from Karte Se formed the Afghan national team in 2007 is the same stadium where, only a few years before, the Taliban were carrying out barbaric ritual spectacles, executing burqa-shrouded “adulteresses” to the moans and wails of the crowds in the bleachers. As the girls from Karte Se were savouring their 2007 victory and planning their next, half a world away eighteen schoolgirls from the Okanagan Valley [in British Columbia] were busy with a fundraising drive. The Grade 5 girls were led by Alaina Podmorow, who had accompanied her mother the year before to hear a speech by [women’s rights activist] Sally Armstrong.

Alaina was nine years old when she founded Little Women for Little Women in Afghanistan. That first fundraising drive raised $3,000, enough to pay the salaries of four Afghan schoolteachers for a year. Over the next few years, Alaina and her young comrades from the Okanagan led three marches for children’s rights on Parliament Hill to protest the world’s inattention to the plight of Afghan schoolchildren, Congolese child soldiers and sweatshop child-slaves in India. By the time Alaina was fourteen, she and her fellow activists had raised $300,000 for teacher-training programs and teachers’ salaries in Afghanistan. 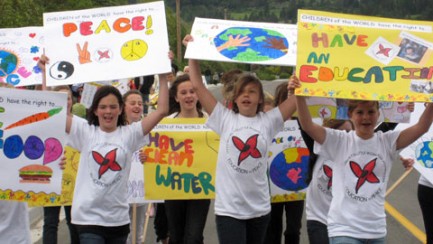 That’s quite an accomplishment for a handful of schoolgirls from a valley in British Columbia’s hinterland. They’d provided more material solidarity for the emancipation of Afghan women than all the trade unions, the provincial and territorial federations, the 136 district labour councils of the three-million-member Canadian Labour Congress and the half-million students and eighty student unions of the Canadian Federation of Students combined.

And I think I can add without fear of contradiction that they’ve done more for the cause of human rights and human freedom than the Socialist Workers Party and the Stop the War Coalition have done in their entire histories.