Most of you will know Monty Python’s “Argument Clinic” sketch.

A:   Yes it is!
M:  Argument is an intellectual process. Contradiction is just the automatic gainsaying of any statement the other person makes.
(short pause)
A:  No it isn’t.
M:  It is.
A:  Not at all.

I think that it is fair to say that a “debate” requires, at the very least, that the participants take contrary positions. 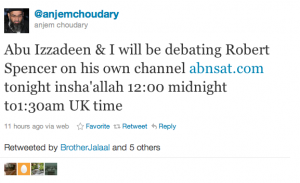 Given that Robert Spencer and Anjem Choudary believe the same thing about the nature of Islam, how will they possibly fill an hour and a half?

I hope that there are a few music breaks.