Gill Kaffash is a supporter of Holocaust denial, and of the notorious Holocaust denier, Paul Eisen: who, in an article entitled “My Life as a Holocaust Denier”, thanks her for having “openly and repeatedly demonstrated their solidarity” with him.

She is also the Secretary of the Camden branch of the Palestine Solidarity Campaign, and is listed as the contact on its Facebook page.

Here is Gill Kaffash, speaking to the Iranian state news agency IRNA about the Holocaust:

There is no doubt that a great number of Jews along with other victims of the Nazi army were killed by Hitler. However, historical phenomena need to be further examined to uncover the truth. Therefore banning opposition to the theses termed as `invariable reality` is irrational.

We learn, via Gilad Atzmon, why it is that Camden Council removed the link:

The Council has received a complaint about your name and details being placed on our website as the contact for the Palestine Solidarity Campaign [PSC]. The complaint is we should not be promoting you as the PSC contact because it is reported you support the Holocaust denial views held by Paul Eisen in an article dated January 2008. Clearly this is a sensitive matter because it may conflict with the Council’s equality policy so I want to give you the opportunity to comment on whether this article is correct or not before deciding what action, if any, the Council should take.

Reader may wonder what evidence Mr Inglefield has for Gill’s supposed views on some historical events. The answer is, that in a footnote in an article he wrote, Paul Eisen thanked Gill, among others, for her friendship and support. Anyway, Gill replied to Mr Inglefield asking him to explain exactly how what is complained of might contravene Camden Council’s equality policy. Mr Inglefield replied that

The council’s equality policy, …….sets out that we are committed to creating a socially inclusive and cohesive community within Camden. There are a number of ways which we aim to achieve this, such as by celebrating the diversity of our community and ensuring the communications we produce positively reflect and promote the diversity of our communities.

And goes on to say that

“Council is concerned your reported views on the Holocaust may conflict with the aims of this policy”. And that If you hold these views it could imply the Council somehow condones them by publishing your name as the PSC contact on our website. We do not consider such views, given the offence they cause, are conducive to our aim of promoting diversity and tolerance.

However, obviously concerned that Britain’s finest traditions of fair play are upheld Mr Inglefield goes on:

“… but I wanted to have your views and clarification as to your actual position before coming to a final decision.

And finally he offers Gill a way out.

“Obviously if you can confirm to me in writing that these are not your views, and take the necessary action to remove your name from the article, then we can reinstate you as the contact for the PSC.”

Oh, and from where did Paul Inglefield receive the complaint? Why, from award-winning Zionist neo-con blog Harry’s Place of course.Now, apart from wondering what the exact connections are between Paul Inglefield, Camden Council and Zionist lobbyists such as Harry’s Place, residents may want to know:

How precisely do Gill Kaffash’s views on a particular period of history have any bearing on community inclusiveness and cohesion in Camden?

Why can Gill Kaffash or anyone else for that matter not hold whatever view they like on a piece of history without being subjected to harassment by local government officials?

How appropriate is it that a Council employee should take it upon himself to decide who the PSC may or may not have as their contact?

Does this mean that the well-established Zionist control of central government is now seeping down to local government?

When will all this disgraceful nonsense end?

No real need to comment on Gilad Atzmon’s piece in defence of Gill Kaffash. It proves the point being made.

Indeed, it demonstrates further why Camden Council were right to take action on this issue. We can’t be sure, but it looks very much as if Gill Kaffash has simply handed on the correspondence from Camden Council to Gilad Atzmon. Given that Gilad Atzmon is also a supporter of Holocaust denial and is an extreme antisemite, that would figure.

After our series of posts, exposing widespread support for Holocaust deniers and other forms of racism and bigotry in the Palestine Solidarity Campaign, the PSC changed the text of its online “Aims” to include the following statement:

Any expression of racism or intolerance, or attempts to deny or minimise the Holocaust have no place in our movement. Such sentiments are abhorrent in their own right and can only detract from the building of a strong movement in support of the fundamental rights of the Palestinian people. We welcome all those who share our aims to join PSC.

This announcement was not received well on the Facebook page of Camden PSC: 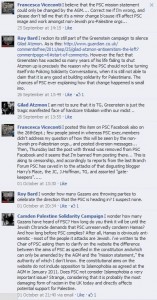 Francesca Viceconti was worried about that opposition to Holocaust denial would reflect badly on the PSC:

I posted this item on PSC Facebook also on the 26thSept.; few people joined in whereas PSC exec.members didn’t address my question of how this will be seen by the non-Jewish pro-Palestinian orgs., and posted diversion messages… Then, Thursday last the post with thread was removed from PSC Facebook and it seems that I’m banned from posting there… This is aking to censorship, and accordingly to reports from the last Branch Forum PSC has caved in to the attacks of that disgusting blogger Harry’s Place, the JC, J.Hoffman, TG, and assorted “gate-keepers”…..

“Gatekeepers” is the term that Atzmon and his supporters use, to describe anti-Zionist Jews who oppose Holocaust denial.

Indymedia activist, Roy Bard – who has a history of defending Holocaust deniers – was also up in arms:

Atzmon himself then joins in:

I am not to sure that it is TG, Greenstein is just the tragic manifested face of hardcore tribalism within our midst

The final message on the thread is from Camden PSC itself, quite possibly Gill Kaffash. Here is her concern:

I wonder how many Gazans have heard of PSC? How long do you think it will be until the Jewish Chronicle demands that PSC unreservedly condemn Hamas? And how long before PSC complies? After all, Hamas is obviously ant-semitic – most of the people it attacks are Jewish. i’ve written to the Chair of PSC asking them to clarify on the website the difference between the aims of PSC as specified in the constitution andwhich can only be amended by the AGM and the “mission statement,” the authority of which I don’t know

Hugh Lanning, Chair of the PSC and Deputy General Secretary of the Public and Commercial Services Union has made a firm rhetorical stand against antisemitism, in the New Statesman

As an ex-manager from the Labour Party surely knows, member organisations do need to deal with breaches of their policies and principles when they are aware of them, and PSC is committed to doing so.

The Palestinian solidarity movement will always stick to anti-racist principles, for reasons that include but extend beyond the moral dimensions

Is Gill Kaffash still secretary of Camden PSC? If so – like her friend, Paul Eisen – isn’t it time for her to resign, or be expelled?

More to the point: why is Camden Council still linking to a Facebook page for a group, run by a supporter of Holocaust denial?

Andy E H, in the comments below says:

“Update Gill Kaffash resigned as Secretary of Camden after members of its Committee became aware of her views and made it clear how unacceptable they found them.”

Time to take her email address off the Facebook page, in that case.

In the last few months in the UK, more and more exiled Palestinians and solidarity activists have been kicked out from PSC and other solidarity organisations, thanks to relentless pressure from the so-called ‘Israel Critical Jews’.

Francis Clark- -Lowes, former Chair of the National PSC was thrown out of the PSC a few months ago due to demands mounted by the infamous Jewish activist Tony Greenstein. Admired Palestinian poet and writer Nahida Izatt was also cleansed. This time it was no Israeli or a ‘Zionist’ who barred her from her local Palestinian solidarity group – it was a Jewish ‘anti’ Zionist Greg Dropkin who had been harassing her and other intellectuals for years.

A similar fate was awaiting Gill Kaffash, an admired London activist, who was asked to resign from being Camden PSC’s Secretary. Sammi Ibrahem, Palestinian activist and radio journalist, originally from Gaza, was Chair of Birmingham PSC – at least he was, until he too was expelled due to Jewish ‘anti’-Zionist pressure.

There has been a bit of a purge.