This is a cross-post from the CST blog

In the recent ruling (pdf) issued by the Immigration Tribunal which turned down Sheikh Raed Salah’s appeal against deportation from the UK, the immigration judges noted that Salah:

has admitted in criminal proceedings being involved with organisations used to fund Hamas, a group part of which is proscribed as being a terrorist organisation.

At an earlier bail hearing, Salah had instructed his lawyer to deny that he had any connection to Hamas at all:

The government submissions also alleged Salah has links to Hamas. Husain, acting on instructions from Salah, absolutely denied this. The only evidence the government seemed to present on this point was a statement Hamas had issued on one of its website (sic) protesting his arrest.

In fact, Salah’s connections with Hamas went much further than one statement from Hamas protesting his arrest: in 2005, Salah was sentenced to three and a half years in prison by an Israeli court, for his involvement with illegal organisations which were banned in Israel for providing money to Hamas. At Salah’s full immigration tribunal, the UK government presented a copy of the Israeli plea bargain in which Salah admitted these offences, and the sentencing document from the trial. You can read the full indictment (titled ‘Amended Indictment’) which was accepted under the plea bargain here in English and in Hebrew; and the ‘Verdict and Sentence’ document here, in English and Hebrew.

Salah is listed as ‘Accused no.2′ in both Israeli court documents. The Israeli indictment describes the activities of Salah and the other defendants in establishing and managing a series of organisations which, it was alleged, provided funds that supported the activities of Hamas. By doing this, according to paragraph 14 of the indictment, they “promoted the objectives” of Hamas.

The punishments agreed upon are fair in light of the details of this affair; there was no intention to harm the security of the State in any way whatsoever; neither directly nor indirectly.

When the defendants are given the opportunity to speak, Salah is the only one who says more than a sentence or two. He tells the court:

I would like to add one sentence. In the history of Islam, there is a saint known as Abu Abas. He has a parable that says exactly this: remember the name of Omar well because if you say the name Omar many times, then you will remember justice and if you remember justice, then you remember God that God is just. What I wanted to say is that God is also angry and when God is angry he is angry when justice is absent. What was, was, and I again, I retract. I join in what my advocate has said, but I hope that you will listen to the end of my speech. Only one sentence: do not take it to heart, my dear sirs, I fear that we will see this happen again with another group of people. I suspect that we will see this again more than once with groups from the Arab sector. I think that if we do see this again, then God will be extremely angry, in other words, if God will become extremely angry, I fear that the State of Israel, owing to this anger, will last for less than 20 years.

At his UK immigrational tribunal, Salah was asked about this trial, his conviction and the offences to which he pleaded guilty. He admitted (paragraph 9(v)) having provided funds to these organisations but said this was for “charitable and humanitarian purposes” only. He still denied having links to Hamas, despite the fact that in the Israeli plea bargain he had admitted to having “promoted the objectives” of Hamas through his activities. The immigration judges noted his defence, but concluded that:

notwithstanding the plea bargain, [Salah] has admitted in criminal proceedings being involved with organisations used to fund Hamas, a group part of which is proscribed as being a terrorist organisation.

Although only the military wing of Hamas (the Izz al-Din al-Qassem Brigades) is a proscribed terrorist organisation (pdf) in the UK under the provisions of the Terrorism Act 2000, since September 2003 it has been illegal under HM Treasury sanctions to provide money to any part of Hamas – military or political. In addition, one of the organisations at the centre of Salah’s 2005 trial, the al-Aqsa Foundation (which uses a variety of similar names, but is different from the UK group Friends of al-Aqsa), is itself also subject to HM Treasury sanctions for its involvement in funding Hamas terrorism.

While Salah still seems intent on persuading people, despite the clear evidence to the contrary, that he has no links to Hamas, Hamas seem keen to claim him as one of their own. The September 2011 issue of Al-Qassamiyyun magazine – the official magazine of the Hamas Izz al-Din al-Qassem Brigades, a proscribed terrorist organisation in the UK – includes (on page 33) a poem dedicated to “our guardian” Sheikh Salah. The full Arabic original can be read below, and translates as follows:

The star in the deep-black nights

Poem by Ibrahim Abu al-Hawa, ‘a poet from Jerusalem’

A messenger arrived to lead the way to salvation, / and call the people aloud for battle.

We [warmly] welcome our great pioneer [‘Raed’] / and greet the sons of goodness [‘Salah’].*

Those who cannot distinguish between the manliness of a serious man / nor between wrong and right.

Will a land return by chatter / or rights by turmoil.

And the Sheikh came with firm determination / defending the mosques and their vicinities.

He appeared like a full moon, in the middle of skies / to shed light on the Universe in all directions,

He led the processions of the free people on sea / challenging the waves in spite of storms.

He is not afraid of sharp swords and lances / and not even from fighting with swords with pikes,

He is not scared of imprisonment or arrest / and is not weakened by the pain of wounds.

Allah has cultivated him for Islam to save it / to remedy all fractured wings,

[Allah] has stood by him with an almighty victory / so we defeat the deception of the sons of bitches.

May you remain our guardian Oh Salah / Hurray to the face of happy demeanor and kindness,

Hurray to the star in the deep-black nights / hurray to the dawn which heralds the morning.

*The Arabic words for ‘pioneer’ and ‘goodness’ are puns on the names ‘Raed’ and ‘Salah’.

***
Harry’s Place adds: when Salah was arrested in London, out trooped the Gaza leadership of Hamas to salute him. Here they are. 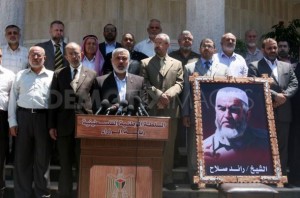 At a Gaza Legislative Council solidarity rally for the leader of the northern branch of the Islamic Movement in Israel, Sheikh Raed Salah, who is detained in the U.K., Hamas Prime Minister Ismail Haniyeh said that Salah is a symbol of the Palestinian presence in occupied Palestine since 1948.

Haniyeh added that Salah expresses Palestinian desires and aspirations, especially regarding Jerusalem and the Al-Aqsa mosque, and therefore harming him harms the entire Palestinian people and free men everywhere.

Haniyeh condemned British support of the occupation, and called on human rights organizations to work to free Salah, saying that he is “a messenger of freedom, respect, and human rights.”

On another occasion Haniyeh hailed Salah as a “great Palestinian leader”.

Hamas Damascus too has admiring words for Salah: