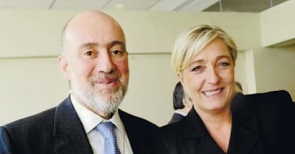 Marine Le Pen hit the jackpot. She invited about 100 diplomats to a luncheon last week during a visit to UN Headquarters in New York. Four accepted: There were the envoys from Trinidad and Tobago, Armenia and Uruguay, who obviously are of no concern to her at all. But the entrance of the fourth guest, Israeli UN Ambassador Ron Prosor, made the event a sensation and worth her whole trip.

No official American representative agreed to meet with France’s extreme-right leader. Neither did any leader of the Jewish community. She failed in her attempt to stage a photo op at the Holocaust Museum, and skipped the visit. The French ambassador to the UN sent a sharp message that she is persona non grata in the United Nations building. But the Israeli envoy? He shook her hand and spoke of the importance that must be accorded to a wide variety of opinions.

“We flourish on the diversity of ideas,” Prosor said. “We talked about Europe, about other issues and I enjoyed the conversation very much,” Prosor was quoted as saying. Even before he went into the hall where the luncheon was being held, he told shocked reporters that he was a “free man.”

The Foreign Ministry now claims there was a misunderstanding; the ambassador “thought he was attending an event hosted by the French UN delegation. When he realized his error, he skipped the meal and left.” User comments on leading French news websites over the weekend were derisive, including all the French equivalents of LOL and ROFL in response to the explanation.

These [far-right European politicians] like Le Pen, have exchanged the Jewish demon-enemy for the criminal-immigrant Muslim. But they have not really discarded their ideological DNA. The Israeli seal of approval they seek to get is intended to bring them closer to power. Le Pen herself has decided to leave behind the anti-Semitic scandals of her father, Jean-Marie. She wants to make the National Front a popular and legitimate party.

She is already popular (19 percent in the polls). Legitimate? In two interviews she gave to Haaretz in the past, she attacked President Jacques Chirac for his historic 1995 declaration in which he took, in the name of France, responsibility for Vichy war crimes. She adamantly refused to denounce French fascist crimes and showed that she cannot really disengage from her father, his heritage and her party’s Vichy and anti-Semitic hard core.

Despite Marine Le Pen’s efforts to expunge the National Front’s antisemitic record, as recently as 2009 she defended the antisemitic, Holocaust-ridiculing “comedian” Dieudonné.

The delegation included Filip Dewinter, a leader of Belgium’s Vlaams Belang party, “a successor to the Flemish National Movement, many of whose members collaborated with the Nazis. Among its current members are a number of Holocaust deniers. Dewinter himself moved about in anti-Semitic circles and has ties to European extremist and neo-Nazi parties. In 1988, he paid his respects to the tens of thousands of Nazi soldiers buried in Belgium, and in 2001, he opened a speech with an oath used by the SS.”

Another visitor, Austrian Freedom Party leader Heinz-Christian Strache, “[a]s a university student… belonged to an extremist organization from which Jews were banned, hung out with neo-Nazis and participated in paramilitary exercises with them.”

How many believe that the likes of Dewinter and Strache have undergone a genuine change of heart about the Jews, as opposed to opportunistically exchanging hatred of one group for hatred of another?

Update: It doesn’t get any better. The Miami Herald reports:

Marine Le Pen, a candidate for president of France whose politician dad once called the Holocaust a “detail” of history, had a dinner date Saturday with Jewish Palm Beach — after being turned down for a reception in Miami.

Le Pen is on the tail-end of a controversial U.S. tour that saw her snubbed by the Washington establishment. An insider familiar with Le Pen’s schedule said she had a stop planned in Miami on her way to the airport Sunday.

She changed her mind — as she did Wednesday when she skipped a tour of the U.S. Holocaust Memorial Museum — when her staff failed to find a Magic City venue.

In Palm Beach, meanwhile, she was scheduled to be the guest of Town Councilman Bill Diamond Saturday night.

The 200-plus guests who quietly received invitations to Diamond’s $4 million house were mostly Jewish and Republicans.

Le Pen’s Front National party was founded in the late ‘70s by her dad, Jean-Marie Le Pen. His populist anti-Semitic, anti-foreigner rhetoric got him elected to the National Assembly, France’s Congress. It also got him charged criminally.

Marie Le Pen’s shtick is mostly anti-immigration. “She can’t be held responsible for what her father did,” said Robin Bernstein, a Republican campaign consultant who was at the reception. “I respect the people who are hosting her. I’m not going to write a check, but I’d like to listen to what she has to say.”

Said Andrew Rosenkranz, Florida director of the Anti-Defamation League: “We believe no one who opposes anti-Semitism and racism should [meet with Le Pen] … the movement she represents is antithetical to our values.”

On a visit to Washington, Le Pen also managed to meet with Republican Congressmen Ron Paul and Joe Walsh.