The offices of the French satirical paper have been seriously damaged by a petrol bomb following its decision to appoint Mohammed as its ‘guest editor’ in order to mark the victory of an Islamist party in the Tunisian elections:

Charlie Hedbo’s editor is quoted as saying: “We no longer have a newspaper. All our equipment has been destroyed.”

A single Molotov cocktail was thrown at the offices of Charlie Hebdo during the night and a large amount of material in the office was destroyed, police said.

There have been no reports of injuries.

Charlie Hebdo’s website has also been hacked with a message in English and Turkish attacking the magazine.

The paper caused anger when it reprinted the Mohammed cartoons back in 2007.

I had already read about the proposed guest editorship and thought it seemed a rather crude idea, designed to provoke Muslims rather than comment sharply or satirically on events in Tunisia. The editor’s claim that the move was not  intended to be provocative seems pretty disingenuous.   But clearly there is NO excuse for this violence.

Excepting the last sentence of Sarah’s post, I don’t think I could disagree with her more.

Charlie Hebdo is a magazine which takes an equal opportunities approach to offending people. It is anti-clerical and mercilessly takes the piss out of politicians. Think: Private Eye, but with more shit. Its cartoons are crude, and usually scatological. It is proudly secular, in the great tradition of French secularism.

Frankly, to burn down Charlie Hebdo is a symbolic gesture: equivalent to and as disgusting as burning down a mosque.

You’ll remember that back in 2007, a pathetic attempt by The Grand Mosque, World Islamic League and Union of French Islamic Organisations to bring a private prosecution against Charlie Hebdo for criminal libel – for republishing the MoToons – failed. Charlie Hebdo was fully supported in its defence by the Left and the Right alike:

A lawyer acting for Charlie Hebdo read out a letter in the Paris court where the case is being heard from Mr Sarkozy, who noted that he is often targeted by the magazine’s cartoonists, but said he preferred “too many caricatures to an absence of caricature”.
…
The leader of the French Socialist Party, Francois Hollande, and a centre-right candidate in the country’s forthcoming presidential elections, Francois Bayrou, are also expected to testify on behalf of Charlie Hebdo.
…
Its first witness, Paris University philosopher Abdel Wahhab Meddeb said he laughed when he saw Charlie Hebdo’s cartoon. “I urge Muslims to adapt to Europe and not the other way around. That would be catastrophic,” he told the court.
“The trial against Charlie Hebdo is one of a different age,” the daily Le Monde wrote in an editorial. “In a secular state, no religion and no ideology is above the law. Where religion makes the law, one is close to totalitarianism.”
…
In opening arguments in the defamation trial today Mr Val defended publication of the cartoons, saying they were aimed “at ideas, not men”.

“If we no longer have the right to laugh at terrorists, what arms are citizens left with?” he added. “How is making fun of those who commit terrorist acts throwing oil on the fire?”
…
“What is sacred for a religion is sacred only for believers of that religion,” he told the court. “If we respected all the taboos of all religions, where would we be?”

That is the difference, I suppose, between Britain and France. In France, all parts of the constitution stand up strongly for secularlism and liberty. In Britain, we vex and fidget.

Was the decision to make Mohammed the editor of Charlie Hebdo for a week “a rather crude idea, designed to provoke Muslims rather than comment sharply or satirically on events in Tunisia”. No. It is very clear that Ghannoushi’s Islamist party – very far from the ‘moderate Islamists that they are claimed to be – proposes to do precisely this with Tunisia. Islamists attempt to install dead religious figures as political leaders. It is the perfect satire.

Tunisian secularists are rightly terrified for their future, and Charlie Hebdo was right to show solidarity by ridiculing the politics of the Tunisian far Right, in a manner that is fully in keeping with their general editorial approach of 360 degree irreverence. Racists and bigots, they most certainly are not.

The worst thing about the destruction of Charlie Hebdo, of course, is that Mohammed will now be deprived of the opportunity of editing the newspaper. 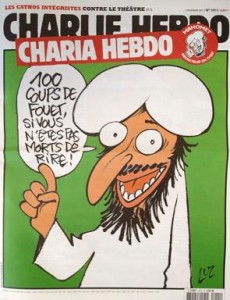 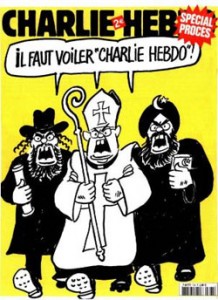 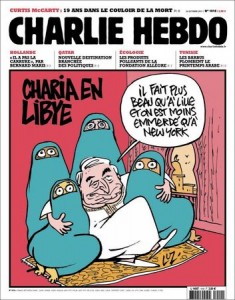 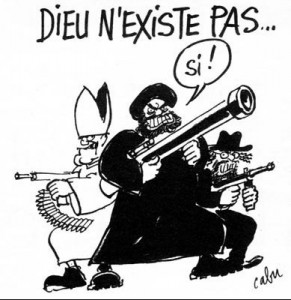 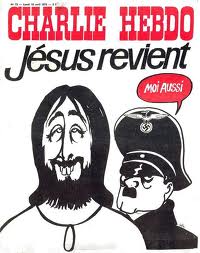 Also, read Andrew Coates on the uniform reaction of the French Left – from hard to soft – in defence of Charlie Hebdo:

We need a proper Left and a genuine Progressive politics in the United Kingdom.

Sarah adds: I certainly don’t have any really substantive disagreements with Alan’s addition, and would like to clarify my position here.  We should be able to mock and criticise all religions, and any attack on that freedom should be resisted.  I noted my opposition to plans to outlaw religious defamation here, and blogged about the issue here.

I can understand how the satire ‘works’ as a critique of Islamism – yet I still thought it was rather crude, and perhaps more likely to appeal to Islamophobes than Tunisian secularists.  For me, that’s just something to have a discussion about, and not a reason to prevent publication, bomb the building, or in any way excuse such an attack, so I’m sorry if my rather compressed pre-work post gave that impression.