Yesterday, I asked a question:

If a person denies clear evidence of racism, defends a racist, and attacks a leading anti-racist institution, is it fair to conclude that they are in fact a racist?

It is a genuine question. The answer in some cases will, undoubtedly, be yes. However, others may find themselves in the position of supporting a racist and denying their racism, and attacking anti-racist organisations: because they believe that a little racism is necessary, in furtherance of a greater political cause. Those people are not racists themselves. They are merely tolerating and facilitating racism, making it more difficult to challenge, giving it an alibi.

Yet others may honestly fail to recognise racism, or may not believe the evidence of racism. It is quite easy to tell who those innocent endorsers of racism are. They’re the ones who, once they realise their error, are the keenest to correct it, publicly.

Raed Salah is a racist. He is a hardline antisemite, who has admitted funding the genocidal racist terrorist group, Hamas. He is to be expelled from the United Kingdom because, in the words of the Tribunal.

We are satisfied that the appellant has engaged in the unacceptable behaviour of fostering hatred which might lead to intercommunity violence in the UK.

“We are satisfied that the appellant’s words and actions tend to be inflammatory, divisive, insulting and likely to foment tension and radicalism.

Let us recap, briefly, the reasons that we can be sure that Raed Salah is a racist and extremist.

Now, if you are a racist, or a strategic facilitator of racism, I wouldn’t expect you to have any problem with any of this at all. Indeed, you probably support Raed Salah because this is what he believes.

However, if you found yourself backing Raed Salah because you’d been fooled into believing that none of the above was true: now is the time to tell us so. It is a horrifying thing to be tricked into becoming an aider and abetter of racism, and you must feel very angry with those who put you in this position.

Raed Salah attracted a good number of supporters who are Labour Members of Parliament. Let’s consider them, one by one.

Corbyn was one of the scheduled speakers alongside Salah at an event in Parliament.  He knew of the evidence showing that Raed Salah was a racist, but dismissed it on the ground that Salah denied that he was:

We checked him out and he denied completely that he was an anti-Semite so we thought it was appropriate to bring him over.

The Parliamentary event went ahead without Salah, who had been arrested.  According to blogger Richard Millett, who attended the event, Corbyn told the audience he would help to challenge the exclusion of Salah.

Now that Jeremy Corbyn MP knows that Salah’s denial of racism was a lie, he should admit his error in backing him.

Yasmin Qureshi was also one of the scheduled speakers at the Parliamentary meeting featuring Salah.  On her website, she has claimed that she “would not wish to share a platform if these allegations were true”.

I was recently informed of allegations made against one of the speakers invited by PSC to speak at the meeting. I do not personally know Raed Saleh but I have been closely observing the situation unfold.  I condemn any form of racism, fascism, anti-Semitism or Islamaphobia. I have made it clear that I would not wish to share a platform if these allegations were true.

However, Qureshi goes on to suggest she does not believe the allegations by republishing a statement from Middle East Monitor and the PSC which includes this line:

The Sheikh has appealed against the deportation in court. His team had already begun legal proceedings against Daily Telegraph and Jewish Chronicle journalists for printing false allegations about him last week.

There will be no libel case. Salah’s racism has been uncovered and verified, and his exclusion endorsed by a court.

Now that Yasmin Qureshi MP knows that Salah’s denial of racism was a lie, she should admit her error in backing him.

Richard Burden is a regular promoter of Islamist extremists.  He was another scheduled speaker at the Parliamentary meeting featuring Salah.  He has issued a statement that is similar to Yasmin Qureshi’s.  He claims he would not share a platform with an antisemite.  He then proceeds to deny the evidence and complains about “innuendo”.

Two weeks ago allegations of anti-Semitism were made against Raed Salah, who I was told was one of the other people PSC had invited to speak at this meeting. To my knowledge I have never met Mr Salah. I have no truck for anti-Semitism and I made it clear that I would not be willing to share a platform with such a person if these allegations were true.

The organisers of the meeting put these allegations to Raed Salah. He denied the statements that had been attributed to him and asked lawyers to begin legal action against those spreading the allegations. I am not aware of any evidence being produced to back up the allegations.

The Home Secretary must urgently clarify this situation. It is important that everyone should be aware of what is fact and what is conjecture. Guilt should be on the basis of evidence and conviction, not by innuendo, allegation or association.

Richard Burden MP then turned up to the meeting which Raed Salah was to have addressed. This is what he said:

Let me put absolutely on the record what Jeremy [Corbyn] said.  Neither I nor anyone else on this panel has any truck with antisemitism, any truck with racism, whatsoever.  But I will say this: if I am going to see anybody convicted of those sorts of allegations, I want to see them convicted on the basis of evidence.  I don’t want to see them condemned and guilt assumed on the basis of innuendo, allegation, or association.  [audience applauds loudly]

Now the evidence has been examined in full. He can read it, through the links above. It has been tested by a court. Raed Salah’s exclusion has been confirmed.

Now that Richard Burden MP knows that Salah’s denial of racism was a lie, he should admit his error in backing him. 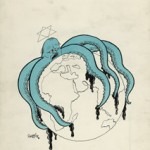 Martin Linton is no longer an MP. However, he runs Labour Friends of Palestine.

He too is a supporter of Raed Salah, and appeared on the Islamic Republic of Iran’s station, Press TV, to argue that Salah should have been admitted to Britain so that he could “speak his mind”.

There is no point in asking him to admit his error in backing Raed Salah. He’s proud of it.

All of the MPs listed above are supporters of Labour Friends of Palestine.

Rather than censure an outfit whose members are apologists for and defenders of this racist, extremist and supporter of terrorism, the Labour Party leader, Ed Miliband, thought it appropriate to honour them at the Labour party conference:

I want to pay tribute to Simon Danczuk, to Andy Slaughter, and to Richard Burden, first of all, as well as Martin Linton, who is here, for the work they do.

Make no mistake. The “work they do” is public defending racists, and attacking those who oppose racism and extremism.

Ed Miliband’s support of those within the Labour Party who have devoted themselves to the defence of racists is no different from the Tory Party, in the days that the racist Monday Club was considered an acceptable part of Tory politics.

The days of tolerating racism are long gone, for the Tories. Not so, sadly, for Labour.

I think that Labour Party members, and voters, have a right to expect a zero-tolerance approach to racism in the Labour Party. It is pretty outrageous that Labour MPs should have appeared in support of, and then in defence of, a man like Raed Salah: whose racism is a matter of record, and is simply undeniable.

Why not write to, or call these MPs. Ask them where they stand now, and if they are prepared to retract their support for Raed Salah, in public.