As news comes in on the fates of the various Gaddafi sons, let’s revisit the glittering party hosted in Venice during the 2005 film festival by Mutassim (apparently executed in Sirte Thursday) and Saadi (reported taken refuge in Niger).

This was shown on something called Fashion TV. 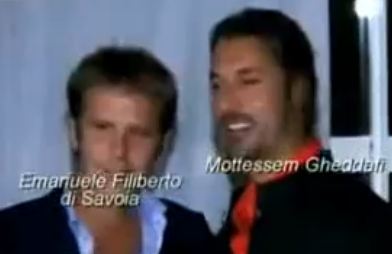 Emanuele Filiberto di Savoia, shown chillin’ with Mutassim, is the grandson of Umberto II, last King of Italy, and considered by royalists to be Prince of Venice and Piedmont.

Isn’t it amazing how many glitterati “friends” you can buy with unlimited oil money?