An academic and prominent supporter of progressive causes has been unmasked as a former spy who controlled a network of undercover police officers in political groups.

During his current career as an academic expert on Islamophobia, Bob Lambert has regularly spoken at political rallies to promote campaigns against racism and fascism.

However, in his previous career as a special branch officer, which lasted 26 years, he ran operations at a covert unit that placed police spies into political campaigns, including those run by anti-racism groups. The unit also disrupted the activities of these groups.

Lambert became head of the unit after going undercover himself.

Since becoming an academic three years ago, he has made no secret of the fact he was a special branch detective between 1980 and 2006, working on what he describes as “countering threats of terrorism and political violence in Britain”.

However, he has kept quiet about his undercover work.

Lambert, who was involved in the secret unit for around 10 years, becomes the seventh police officer to be exposed as a police spy in the protest movement.

The disclosure comes before a major review of the use of such methods is published on Thursday. The report by Bernard Hogan-Howe, the new commissioner of the Metropolitan police, was commissioned by police chiefs after a series of revelations about Mark Kennedy, the officer who spent seven years embedded in the environmental movement.

Lambert was confronted about his past by a group he once infiltrated, while at a conference on Saturday. In one of many appearances on political platforms, he was a speaker at the conference, organised by Unite Against Fascism to promote anti-racism and multiculturalism. Last week he urged people to attend the conference to “show a united front against hatred and bigotry and celebrate the diversity of our multicultural communities”.

Using the alias “Bob Robinson”, Lambert posed as an activist in the group London Greenpeace between 1984 and 1988, say other members. The group, which had a libertarian philosophy, campaigned against nuclear power and weapons, as well as on other environmental issues, and says “Robinson” attended protests and meetings. It is understood that he also infiltrated animal rights protests.

On Saturday, members of the group pressed him to apologise for long-standing infiltration of political campaigns. He refused to comment, according to them.

At the time, he was acting as a member of a secretive police unit, the Special Demonstration Squad, which embedded undercover officers into groups it believed posed a threat to public order.

During the late 1990s, Lambert took charge of operations for the SDS, which penetrated both left and rightwing campaigns.

He was responsible for undercover police officers such as Pete Black, who spent four years pretending to be an anti-racism activist, and Jim Boyling, who was embedded in an environmental campaign against cars, Reclaim the Streets. 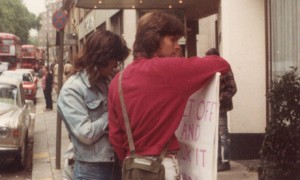 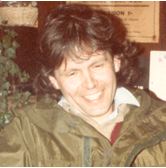 The consequences of this revelation will be far-reaching. There are some very important questions which Bob Lambert needs to answer. The trouble is, because of the nature of his activities – as a police infiltrator who participated in extremist politics – it will be difficult to believe any explanation he gives.

There is continuity between Lambert’s past as an infiltrator and provocateur, and his present political activities. To the security services, Bob Lambert markets the rationale of partnering with Islamist groups, precisely on the basis that they can be persuaded act as narks and enforcers: who can inform the police of terrorist threats and help to prevent them. Lambert also argues that Islamist groups are a safety valve taking kids out of Al Qaeda politics, and that they act as a bulwark against Al Qaeda. But at its heart, the sort of close working relationship with extremist Islamist groups that Lambert champions is another version of the infiltration technique he practiced as a police officer.

However, as we have asked before: at what cost to Britain?

The thing is:  Lambert doesn’t just cultivate narks. He supports and defends groups with horrific racist and authoritarian politics, and attacks Muslim liberals and others who oppose the politics of Islamist groups. He does so from a University Research Centre, in the press, and in public meetings. And he does so, within the political establishment, using his decades long reputation as an infiltrator of extremist groups to add authority to his policy preferences.

In other words, security information from Islamist and jihadist political groups is “bought” at the cost of promoting and legitimising a hateful politics. The groups which Lambert promotes are almost indistinguishable, ideologically, from the groups which support terrorist attacks at home. Indeed, most of them support terrorist attacks on civilians abroad, and attacks on British troops. It is notable that all the groups which Lambert now supports – the Muslim Brotherhood and the Jamaat-e-Islami franchises – were enthusiastic supporters of the Al Qaeda leader, Anwar Al Awlaki, and toured him around the United Kingdom a few years ago. Their counterparts in South Asia and the Middle East openly mourned the “martyr”, Osama Bin Laden.

So, here’s my question? Is Bob Lambert an infiltrator into Islamist politics who “went native”, in the way that Mark Kennedy/Mark Stone did, and who now genuinely supports Islamist politics? In that case, is he using “counterterrorism” as an alibi for promoting a totalitarian antisemitic, homophobic and misogynist politics which he finds deeply attractive? As I have previously noted, there is no other political movement in the United Kingdom which allows you to get away with what, let’s face it, were once pretty standard “Life on Mars” attitudes within the Police.

Or is he just pretending to support this politics, in the manner of the best of participating informants, in order to get close to the “bad guys”? In which case, what do the Jamaatis and Ikhwanis think about being used in this way? Is Lambert still undercover? Has his entire career been one great charade? How much information are the leaders of the Islamist establishment handing over to Lambert, and what did he do with that intelligence?

If I were young cadre in an Islamist movement, I’d be getting ready to ask some VERY searching questions of my superiors!

Either way, it is pretty murky stuff. Now Lambert has been unmasked as a double dealing spy, I would have thought that at least some within the conspiracy-minded Islamist groups will go nuts. Not to mention the far Left groups, on whose platforms he now routinely speaks.

For example, I’d be interested to hear the reaction of Professor David Miller, who is scheduled to speak alongside Bob Lambert at the East London Mosque next month. Hilariously, Lambert is speaking on Miller’s thesis: that those who criticise extremist Islamist politics are engaged in a sneaky “Cold War”, generally, against British Muslims 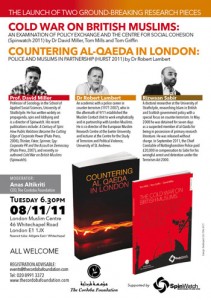 Miller is preoccupied with shady plots and conspiracies, and promotes himself as an expert on them.  So, who better to opine on this morning’s shocking revelations.

It gets worse and worse.

LooseStool in the comments below says:

I knew “Bob Robinson” very well in the 1980s as a friend, albeit one who was into all sorts of extreme actions of an anarchist/animal rights nature. I and others got dragged into his doings as a kind of “beard”. We weren’t into that stuff and I imagine made good social camouflage simply because we were so unexceptional.

I’m amazed, having read articles by him and various denunciations, on here and other places, that the penny never dropped before. I never saw a decent photo or I’d have twigged straight away. He’s changed very little.

This story has been coming for a while – he was exposed in the fallout from the Kennedy/Stone stuff (specifically in the Laura case of the woman who had 2 kids with and married a cop)and the Guardian already know an awful lot more than they’re letting on.

This has implications from all sorts of angles – Remember McLibel, anyone? He was a leading light in London Greenpeace throughout the early part of the saga and may even have co-written the pamphlet concerned. He certainly claimed that to other people and seemed very proud of it when he showed me a copy in 1988.

He has a lot of questions to answer, both from his old friends who liked him and so helped him out of personal loyalty, and from his newer ones who, as the stuff – relationships, at least 1 kid fathered along the way, a horrid blurring of the lines between the personal and the professional – comes out will be horrified, I’m sure.

The groups he associates with now will be, with good reason, paranoid about police infiltration and their heads will be spinning.

He will have known this day would come and he must have a line to spin. I’ll be interested to hear it.

I’m interested to hear it too. Particularly about the child. How far undercover did Bob Lambert go?

If Bob Lambert did co-write the McLibel leaflet – which resulted in the longest libel trial in legal history – then frankly, the Metropolitan Police ought to be footing part of the legal bill for that disaster.