Via Terry Glavin comes the news that the Occupy protest movement that began at Wall Street in New York has now reached as far as Kabul, Afghanistan. 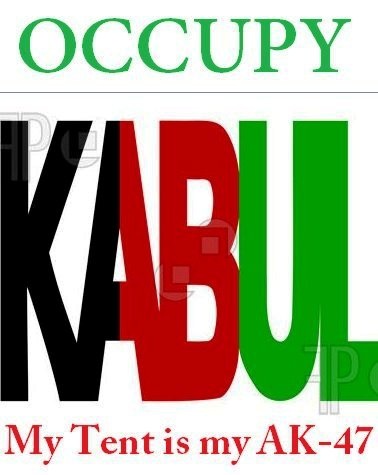 Terry quotes from one of the Afghan protesters who makes it clear that– notwithstanding the simple-minded “antiwar” Left– it is possible simultaneously to:

a) Be grateful to the countries and soldiers that helped liberate Afghanistan from the brutal Taliban regime; and

As for the larger Occupy movement, normblog makes the point that it needs to formulate specific demands if it is to have any influence, and that– contrary to what some supporters are saying– the lack of a specific agenda is not a positive feature.

One problem with such protests is that the focus of attention is too often on the behavior of the protesters rather than on the issues they purport to be concerned about– which, as I noted in a previous post, are acknowledged even by some Wall Street heavy hitters themselves.

I agree with Paul Sracic, a political science professor at Youngstown State University in Ohio, who wrote that in democratic countries, old-fashioned electoral politics are the most effective way to produce meaningful change:

[H]ere’s the rub: Occupations and rallies are fun. Electoral politics is hard. The rules are complex, and so are the voters. A gathering in the street has a lot in common with a party. Running for office and working for a candidate is like a 9 to 5 job.

And getting involved in the political process forces you out of your comfort zone. Instead of hanging out with a few hundred — or a few thousand — people who basically agree with you, you have to confront and perhaps persuade those who don’t agree with you. In the process, however, you will learn more about democracy then you will at any teach-in.

So my suggestion to Occupy Wall Street and their affiliates throughout the country is to pay as much attention to their 15th Amendment right to vote as they do to their 1st Amendment right to peaceably assemble. In other words, get out of your sleeping bags and onto the ballot!

The Occupy Kabul protesters are struggling for the right to engage is honest, corruption-free, coercion-free electoral politics.

Here in southwest Virginia, The Roanoke Times reported last week on an Occupy Virginia Tech rally, including this photo of counterprotesters driving past waving a sign saying “Go home hippies”: 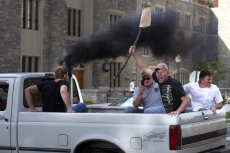 Update: This is interesting. After initially bashing the protesters, leading Republicans have gone all wobbly and are now saying they understand their frustration, and are even echoing some of their concerns.