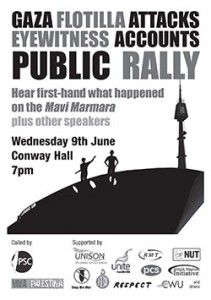 She tells her PSC audience:

“Some of the things that I find disturbing now, more than the scenes of blood, and the massacre itself are, I happen to live in the Finchley area. And sometimes, when I was looking at the soldiers on the boat, pointing their guns at me, I was thinking, do any of you have dual passports? Do any of you live just down the road for me? I think we need to know that. Were British passport holders in the IDF pointing guns at British citizens? And don’t forget *applause* […] really this is the one thought I have in my mind, you know, when I pass people in the street, perhaps these men were part of Operation Cast Lead? Or, perhaps they were on that ship? Who are these people? They all cover their faces, they hide their identity so we don’t know who they are. I think we should demand of our government that British citizens shouldn’t be allowed to go overseas and fight in the IDF” *applause* The fact that British passport holders probably took part in OCL surely it makes them party to war crimes which should be investigated. So that’s one avenue I wish we could look at.”

Note the applause for Stuart’s views on people – British Jews, clearly – whom she suspects have dual identity.