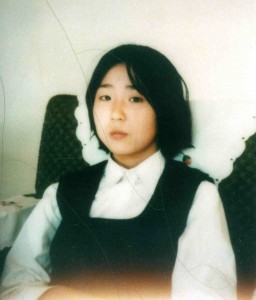 Megumi Yokata (pictured above) was aged 13 when a DPRK kidnap squad snatched her off a Japanese beach in 1977. For whatever reason, it was thought a 13 year old girl could train DPRK spies to pass as Japanese civilians. In 2002, DPRK returned what it said were her cremated remains after a suicide in 1994, although tests confirmed they were not her remains; and her family refused to believe she would have committed suicide.

Now recent defectors from DPRK group have reported that she still is alive.

This group of nine was found drifting off the Japanese coast in a make-shift boat in September, and last week were allowed to move to Seoul. Japanese broadcaster, Fuij TV also reported that one of the defectors has claimed to be from a formerly weighty family in DPRK (and, by weighty”, I mean influential; not in receipt of more than their fair share of food rations as Ricky Gervais lookalike Alejandro Cao de Benós de Les y Pérez de Cacacacacacacaca is seen to be).

This as-yet un-named defector has stated that his grandfather was Baek Nam-woon, an economist who returned to Korea from Japan after 1945 and sat as Chairman of a Supreme People’s Assembly. Hwang Jang-op has said that Baek eventually was purged by Kim Sung-il, and died in the Kwan-li-so system.

This defector also has said that his father was a senior intelligence official involved with the decades-long kidnapping of South Korean civilians, up to 100 of whom were brainwashed and returned to RoK as sleeper agents. He can expect to be quizzed by the KCIA for names of those still present in RoK.

In turn, his father was purged for an unspecified reason. The defector, now in his 40s, became a squid fisherman, and the group leader was a fisherman as well as KPA member (although it is unclear if this is the same individual). Corruption in all levels of what passes for civil structures in DPRK is rampant, and it may be that the drive to defect was due the group leader’s stated frustrating at increasing demands for bribes.

Other group members reported regular contact with family members in RoK, including one who exchanged regular letters and telephone conversations. Add to this the fact that a scion of such an elite family as Baek Nam-woon’s and/or a KPA member has chosen to defect, Kremlinological analysis suggests increasing dissent to the Party’s totalitarian control.