David Gerbi, an exiled Libyan Jew returned to Libya to join the anti-Gaddafi rebels. He has now left.

You’ll recall that Mr Gerbi was the target of death threats, because he tried to clean up a derelict Libyan synagogue.

On Friday, the eve of Yom Kippur, Mr Gerbi was the target of an angry demonstration, carrying placards stating “There Is No Place For The Jew In Libya“. 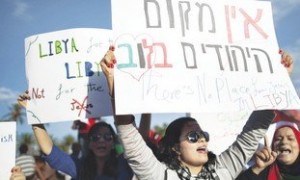 The crowds tried to storm Italian Libyan Jewish psychoanalyst David Gerbi’s Corinthia Hotel in central Tripoli. There was also a demonstration in Benghazi in the east of the country.

According to Gerbi, the crowd wanted to forcibly remove him from the hotel.

“They were impeded by hotel and Libyan security and government officials,” he said.

“The Tripoli crowd dispersed after Allaghi warned that any use of force on the part of the protesters would immediately result in strong international condemnation,” Gerbi said.

“He [Allaghi] reassured them the ‘problem’ would be resolved within 48 hours.”

Guess how “the problem” was resolved?

On Sunday, after a personal meeting with Libyan and Italian diplomatic representatives, he agreed to return to Rome on Tuesday by military plane in order to ease the tension.

Gerbi said the Italian ambassador in Tripoli claimed that the controversy over his actions was strengthening the extremist wing of Islam in the current internal war in Libya between extremist and more moderate, liberal Muslim forces.

Have a look at the picture of the demonstrators. Do the two women holding placards look as if they’re from the “extremist wing of Islam”?

Gerbi had been told he was “complicating matters,” that “the time is not ripe for such actions” and that his security was endangered. In addition, his attempt to clean out the garbage littering the synagogue was defined as “breaking into an archaeological site without permission,” for which he received a police summons.

And now you know why the majority of the Middle East’s Jews now live in Israel.

In the comments below, “j.r.” observes, sarcastically:

Yes obviously you can extrapolate from one incident in Libya to the whole middle east, and ignore the evidence from those countries where jewish communities coexist.

Which leads me on to this sad story:

An Anglican priest here says he’s working with the U.S. Embassy to persuade the handful of Jews who still live in Baghdad to leave because their names have appeared in cables published last month by WikiLeaks.

The Rev. Canon Andrew White said he first approached members of the Jewish community about what he felt was the danger they faced after a news story was published last month that made reference to the cables.

“The U.S. Embassy is desperately trying to get them out,” White said. So far, however, only one, a regular confidante of the U.S. Embassy, according to the cables, had expressed interest in emigrating to the United States.

“Most want to stay,” White said. “The older ones are refusing to leave. They say: ‘We’re Iraqis. Why should we go? If they kill us, we will die here.'”

The U.S. Embassy said it would take steps to protect the individuals whose names appear in the cables and suggested in a statement that should any wish to leave, the U.S. would help relocate them.

“Protecting individuals whose safety is at risk because of the release of the purported cables remains a priority. We are working actively to ensure that they remain safe,” the embassy said.

It slammed WikiLeaks for releasing the cables. “Releasing the names of individuals cited in conversations that took place in confidence potentially puts their lives or careers at risk,” the statement said.

A furious White also hit the website for publishing the cables. “How could they do something as stupid as that?” he said. “Do they not realize this is a life and death issue?”

WikiLeaks did not respond to a request for comment.