Have you heard the revealing vignette, about the fallout between Gilad Atzmon and Reem Kelani?

I know that he also was very bullying to Reem who felt that she was being ‘occupied’ by him, she felt he was stealing her DNA by using her Palestinian music as his own and not giving her credit – for example, when he released an album when they were meant to be working together, he only put his own name on it.

I have heard this story from a couple of sources now, including from somebody who interviewed Reem Kelani.

Jazz is a musical style which creates a collage out of the surrounding culture, and claims it as its own. That is what Atzmon did with Palestinian folk song on Exile. It is in the nature of Jazz musicians to do this.

Jazz is also is an art form particularly associated with black and Jewish people: and so, of course, it was despised by the Nazis who called it: Degenerate Music 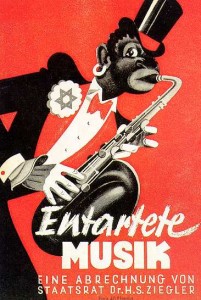 The specific criticism, as I remember it, was that Jazz was Jewish ‘art’ exemplified. Jews, so the Nazis thought, were unable to come up with anything original or valuable themselves: and simply repackaged, spunged off, and sold on the genius of others. (As a footnote, Atzmon, I’ve been told, believes that Jewish klezmer music – which is one of the genres which feed into his own style – was plagiarised from the Gypsies.)

Reem Kelani is no Nazi. She has a specific complaint. It is that Atzmon effectively stole her voice, so that he could pass himself off as a cool world musician, rather than a jazz bore. A funky klezmerist borrowing somebody else’s street cred.

The irony is doubled, trebled, though. Here is Gilad Atzmon, a man who himself peddles Nazi calumnies about Jews, appropriating the music of a Palestinian folk song archivist, and making both his musical and political reputation out of it. The Palestinian is left feeling ‘occupied’ by this Israeli Jew.

Sunny Singh’s comparison of Atzmon to Rushdie is worth exploring in this context.

Like Atzmon, Salman Rushdie is a man who plays with the raw material of culture and myth. So, it is instructive to consider the parallels.

The criticism of The Satanic Verses was that it depicted Mohammed’s wives as prostitutes. That is not true. The prostitutes, who have been named after the wives of Mohammed appear as characters in one, demonically inspired dream sequence. The book as a whole is much more challenging than that. It is an exploration of loss of faith, and displacement of identity, and the story of the prostitutes are but one a manifestation of that struggle. The Satantic Verses is almost a Chaucerian parable: one of those inspired by Boethian theology, in which the faithless man finds himself gradually becoming bestial while falling headlong into eternity, with nothing to anchor him, and only a God shaped hole to aim for.

To the extent that The Satanic Verses is written from Rushdie’s own perspective – and it is – the novel is a public declaration of apostacy. That is its true sin.

So, yes. There are some similarities between Atzmon’s public ‘loss of faith’, and Rushdie’s.

There are a number of really rather significant differences. For example:

Most importantly, Rushdie wrote a novel in the magical realist style. Atzmon, by contrast, has penned a large number of political tracts and a book, and is touring the country and the world, pushing his Nazi theories on Jews.

The thing is, if you cut and paste and recycle as an author, you’ll be rightly called out for plagiarism. As a jazz musician, you’re permitted greater liberties. So, here’s the final irony:

Atzmon, the true jazz musician, has been nicking from the Nazis.