Sunny Singh is a senior lecturer in creative writing at London Metropolitan University.

She writes on her blog:

I am beginning to realise that at least once a year, I use this blog to tell off fanatics. So far, it has been Islamist nut-jobs who got offended by my piece on Salman Rushdie. Then some time later, I wrote about Mumbai and Rohinton Mistry and some Hindu fundamentalists (what an oxymoron that is!) were equally offended. Both these links here will take you to what I wrote in those instances.

Last week I tweeted about Gilad Atzmon‘s new book and that has apparently offended some Zionist club of fanatics. Apparently, according to tweets and blogs and other online fora where these fanatics dwell, my reading of a book by a dissident Israeli brands me an “anti-Semite”, a Holocaust denier and/or a Nazi supporter.

Full disclosure: I know Gilad professionally as we share the same literary agent although by no stretch of imagination can we be considered friends. I like his music and respect his writing and political convictions although there are many points of disagreement as well. And we are bound by our mutual respect and affection forShimon Tzabar, the literary legend and human being par excellence(and one of the few utterly moral people I have had the privilege of knowing).

What I wrote for Rushdie applies now to the Zionist nut-jobs accusing me of anti-Semitism, and beautifully demonstrating their own narrow-minded, ignorant racism in their comments.

And now, I shall go off and read some more #GiladAtzmon: btw his new is VERY thought provoking and insightful :-D

Singh is also upset with Israelis in India, tweeting: 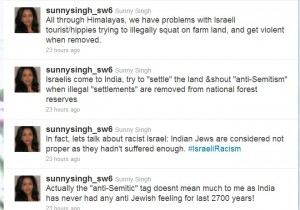 Actually the “anti-Semitic” tag doesnt mean much to me as India has never had any anti Jewish feeling for last 2700 years!

In fact, lets talk about racist Israel: Indian Jews are considered not proper as they hadn’t suffered enough. #IsraeliRacism

Israelis come to India, try to “settle” the land &shout “anti-Semitism” when illegal “settlements” are removed from national forest reserves

All through Himalayas, we have problems with Israeli tourist/hippies trying to illegally squat on farm land, and get violent when removed.

In the comments below, alfie observes:

I’m trying to think of the most perverted analogy to make her comparison of Rushdie with Atzmon illuminated for the degenerate idiocy that it is.

Perhaps if Rushdie had ever suggested that General Dyer ‘may have had a point’ for the Amritsar massacre, this might point the compass of the kind of moral squalor Rushdie would have to engage in to belong in the same bracket as him, but that wouldn’t touch on the genocidal hatreds that Atzmon swims in.

Or taking the Muslim angle, as she cites the comparison more on religious lines (reaction to Rushdie by Muslims equivalent to reaction of Jews to Atzmon) — quite apart from the issue of the fatwa, the mobs calling for his murder, the people killed trying to silence him, his years spent in hiding, none of which are present in any reaction to Atzmon — maybe if he had ever written about how those Hindu fascists who carried out massacres of innocent Muslims at in the 1990’s and in 2002 in Mumbai and Gujarat, ‘may have had a point’, it might at least point in the direction of this idiocy. That would begin to resemble the shit that Atzmon peddles.

But Rushdie isn’t like that. Its the most pathetic and stupid and vile comparison to make – it is slanderous to Rushdie. Sunny Singh is clueless.

Sarah AB adds For the benefit of Sunny Singh, or anyone else reading this who needs convincing that Atzmon really isn’t a mainstream voice, and it really isn’t eccentric or unreasonable to object to him, I thought I’d put in links to a few more relevant pieces from diverse bits of the blogosphere.  For example there’s

Bob from Brockley I’m not sure how to describe him – non-zionist-curious?

Tony Greenstein (who is a very active anti-zionist)

Socialist Unity (a blog which is generally critical of Israel)

Sue Blackwell (leading campaigner for a boycott of Israel)

And obviously lots of pieces in the archives here.  I should make clear that I do not see eye to eye with any of the above (apart from Bob from Brockley) and in particular do not agree with the way they define antisemitism.  I am linking to them, not because I think they are the best critiques of Atzmon, but to attempt to make the point that Atzmon’s views are so extraordinarily bizarre, offensive and extreme that even those who seem to me to set the bar for antisemitism absurdly high reject him.   See this piece on Engage for a discussion of the antizionist rejection of Atzmon.