Paul Goodman’s mid term report on the implementation of the Coalition Government’s Prevent strategy gives three cases by which progress may be judged.

First, the Government does not engage with the Muslim Council of Britain (“MCB”).

Secondly, the Government continues to engage with the Federation of Islamic Student Islamic Societies (“FOSIS”). As is well known, five people who have held senior positions in University Islamic Socities have committed acts of terror or been convicted for terror-related offences. The Coalition sees this as a local problem in local ISOCs, exacerbated by a weak FOSIS leadership. I think they’re wrong on that: the FOSIS leadership is substantially aligned with and supportive of Islamist and jihadist politics, and is a part of the Muslim Brotherhood and Jamaat-e-Islami network in the United Kingdom. It is true to its politics.

Thirdly, Azad Ali appears to be still in place as an advisor to the Metropolitan Police. Seriously. Let me say that again. The man who praised Al Qaeda’s Anwar Al Awlaki, who opposes democracy “if it means at the expense of not implementing the sharia”, and who supports the killing of British troops, is actually advising the Metropolitan Police:

When I last wrote about him in June, he appeared still to be the Chair of the Muslim Safety Forum (MSF), although its website does not now show who its officers are.  It claims to have “signed a working protocol with the Metropolitan Police and ACPO” and to be “advising the police on matters of safety and security from the Muslim perspective”.

Azad Ali is identified as the Chair of the Muslim Safety Forum on the website. His name and post appears in this advertisement for the Bob Lambert bunfight, featuring a number of old friends. 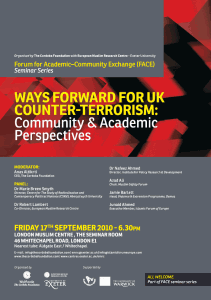 Bob Lambert, as you know, is the copper who pioneered the strategy of partnering with supporters of terrorism and promoters of extremism.

My judgement that although senior civil servants may not like the Government’s shift of policy, they’ve grasped that David Cameron and Theresa May require it to happen, and are thinking implementation through very carefully.  My three examples show how it’s working out.  On the MCB, the Government is sticking to the view that the MCB shouldn’t be engaged with.  On FOSIS, it is also sticking to the opposite view, which was prefigured in the Prevent document.

But on Azad Ali, the position is just… astounding!

The most problematic circumstance is in which an organisation or person which the Government views as extreme is a member of a larger body.  The Azad Ali controversy is the sharpest example.  Ali’s praise for the preacher linked to the Detroit bomb plot and the Fort Hood massace stands on the record, and a judge has ruled that a blog written by Ali can reasonably be read to have supported attacks on our troops in Iraq.

If Ali indeed remains active at senior levels of the MSF, he is an early test case for how seriously Bernard Hogan-Howe, the new Met Commissioner, takes the policy – and of the Home Office’s follow-through.  It says that it wrote to all police forces after the Prevent strategy was published, and it intends to “hold the Met to the fire” over Ali.  Let’s see what happens next.  By the way, the Home Affairs Committee will find it worth studying Centri’s evidence as well as Quilliam’s.

I think we have a right to expect some movement, here.

This is what Azad Ali’s involvement with the police means in practice. When the EDL had a static demonstration in Tower Hamlets, the East London Mosque organised Islamic Forum Europe activists as “stewards”. They were praised by the Met. This is remarkable, as the Islamic Forum Europe is an organisation which is linked with the far Right Jamaat-e-Islami political party. In other words, one group of far Right agitators were delegated the task of policing another far Right set of agitators.

And who was behind the stewarding? Step forward the dual-hatted Mr Azad Ali: head of “Community Engagement” for the IFE.