Sunny is an internationally acclaimed writer of fiction and creative nonfiction. Her debut novel, Nani’s Book of Suicides, published in 2000, was described as a “first novel of rare scope and power.” The Spanish translation of the novel won the inaugural Mar de Letras prize in 2003. Her second book, a work of non-fiction titled Single in the City: The Independent Woman’s Handbook (2001), was a first-of-its-kind exploration of single women in contemporary India and described as “witty and insightful.” Her most recent novel, With Krishna’s Eyes (2006), has been commended for its “profound insight” and described as “memorable.”

Her short stories have been published by prestigious international literary journals including The Drawbridge and World Literature Today. Her creative nonfiction has been published across the world in key journals and anthologies. She also writes for newspapers and magazines, in Spanish and English, across the globe.

Sunny’s research interests include gender, postcoloniality and cinema. For her doctoral dissertation, she developed a cohesive theoretical approach to commercial Indian cinema, using it for teaching post-graduate level courses at universities of Valladolid and Barcelona, and now as part of the Film Studies programmes at London Metropolitan.

She is also actively involved in non-profit and development activities, and is the founder the Jhalak Foundation, an organisation that funds & organises paediatric cardiac surgery for under privileged children in India.

Gilad Atzmon in his new book:

Some Jews are rather unhappy with Charles Dickens’ Fagin and Shakespeare’s Shylock, who they regard as ‘anti-Semitic.’

Weirdly enough, even though #GiladAtzmon is writing about Israel and Zionism in his new book, I can see clear parallels with Pakistan

Midway through #GiladAtzmon’s new book. Ironic how Israel’s victim narrative (he says based in racist separatism) is used by so many others

Yesterday I tweeted about @GiladAtzmon’s new book. Seems there is an online campaign against it already so I shall tweet it again! #contrary

Btw @GiladAtzmon’s new book The Wandering Who: A study of Jewish Identity Politics is out soon: bit.ly/r0y4of 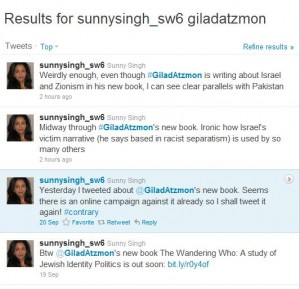 She has previously written:

Sad that his voice is blocked out so willfully by Israel’s mindless cheerleaders. As a born-and-bred Israeli, he ought to be heard. His experiences growing up in that country and serving in its military have shaped his views. And those very views make him unacceptable in his country of birth as well as amongst its supporters overseas.

And that is why his analysis of the current Gaza situation is poignant, astute and Cassandra-like.

But then prophets have always been ignored by their own people!