This is a guest post by Hasan Afzal, Director of StandforPeace.

The Three Faiths Forum is an organisation that claims to ‘build lasting relationships between people of all faiths and beliefs’. It’s an honourable aspiration.

I’ve seen the Three Faith Forum in action. They’re decent people and their interfaith work has rightly won them accolades. Part of their work includes a Parliamentary mentoring programme for undergraduates called “Parliamentors”.

Here, at the offices of StandforPeace, a former ‘Parliamentee’ tipped us off at a recent addition to this programme.

Nadia Marques De Carvalho, a leading member of the radical, pro-Hamas London School of Economics Palestine Society, was accepted to the organisation’s ‘ParliaMentor’ programme. We decided to perform some due diligence on Miss Carvalho and found her twitter feed. Beyond the endearing profile picture, is a deeply hateful person.

Before we go on, regular readers will be aware of just how radical the LSE Palestine Society is. But for those just tuning in:

On the LSE Pal Soc wall, Nadia recommends the following for a day out in London:

So, to recap, that’s a celebration of resistance and the infitada (or terrorism and indoctrination to you and I); In the ‘Women united in the Infitada’ event, the event featured Press TV hack Yvonne Ridley and Ewa Jasiewicz who took part in the desecration of the Warsaw Ghetto. This is considered A-list material if you’re an anti-Israeli bigot.

For someone who is supposed to share the ideals of the Three Faith Forum, have  a look at what she thinks of Israel, the only liberal democracy in the Middle East:

Here is Nadia, retweeting the vicious lie that Israel is ‘ethnic cleansing’: 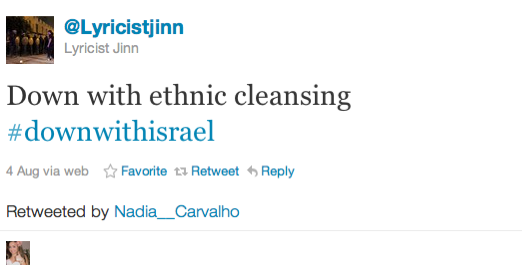 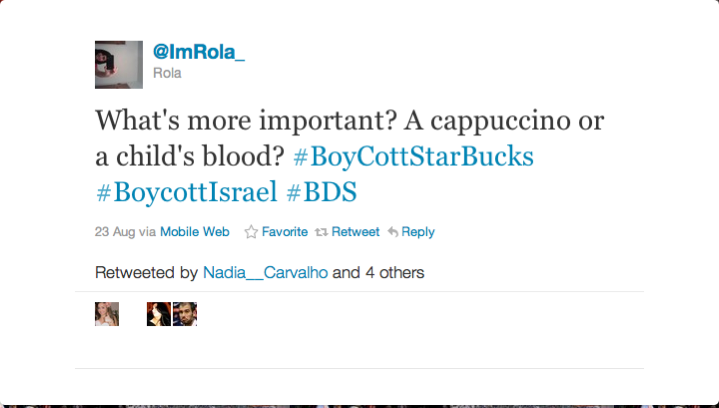 There have been a number of concerns on the strain of Israel and Turkey’s relationship. It’s a genuine cause for concern, but here’s Nadia’s analysis: 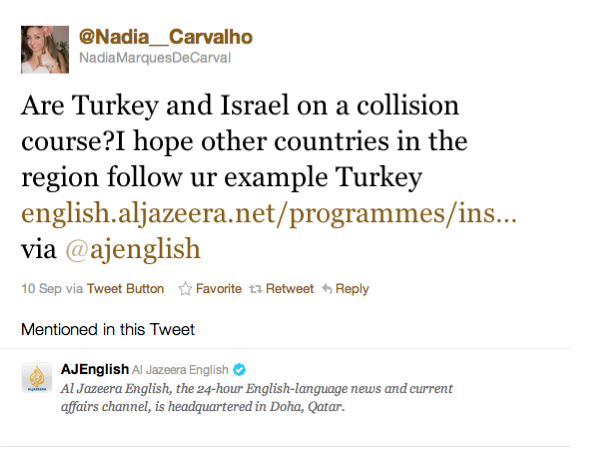 Why would Nadia hope that other nations in the region pursue the sort of aggressive foreign policy that Turkey has implemented, as of late?

For a supposed interfaith ‘ParliaMentee’, she has absolutely no desire to form bonds and understandings between the complicated Middle East conflict. In fact, she hopes Israel “chokes”:

The United Nations has an infamous reputation for disproportionately singling out Israel in the Middle East for alleged ‘human rights’ abuses. This is despite the fact that Israel is the only place in the region where homosexuals can live freely and minorities play a full part in civic life (in fact, Muslims sit on Israel’s Supreme Court and Knesset). But, for Nadia, this must be breaking news:

Note the quote marks in “the only democracy in the Middle East” – it’s clearly meant to deligitimise Israel on what is, quite simply, a fact. Freedom House (pdf) considers Israel to be a ‘Free’ nation-state and awards it top marks for political rights and civil liberties in the region.

This is what Raed Salah had to say of the September 11th attacks:

She certainly knows how to pick her friends.

StandforPeace shared all these concerns with the Three Faiths Forum. I spoke to the Director of the organisation, Stephen Shashoua. Our conversations (we spoke twice on the phone) were cordial and polite.

The response we had from 3FF was extraordinary. Despite the fact we had correctly identified someone who incited hate and displayed the most vicious forms of Israeli bigotry at times I felt that Shashoua thought the problem was actually us.

Shashoua recycled pointless platitudes of how interfaith was a ‘journey’ and how its important to promote ‘dialogue’. Stephen couldn’t quite understand that perhaps Nadia’s tweets weren’t the actions of a naive undergraduate but part of a well organised campaign to deligitimise Israel with organisations who have wider links to neo-nazism, anti-semitism and ultra-nationalism. It was all rather shameless and relative for my liking.

If there’s one thing I’ve learnt from my dealings with this kind of ‘interfaith organisation’ is that their obsession to ‘promote dialogue’ with anyone and everyone is taken to the extreme and thus becomes an article of faith in itself and open to moral corruption.

And to conclude, had Nadia learnt anything from this nirvana of an interfaith journey with 3FF?:

Tweeting to Ben White, whose extraordinary insight leads him to “understand” why some people are anti-Semitic, the answer is obviously no.

Bigoted people are supremacists by their very nature. And Nadia Marques De Carvalho is among their rank.

Should you wish to ask the Three Faiths Forum why it is that Nadia is on their ParliaMentor programme (or why their organisation has no sense of moral clarity), they can be reached at info@threefaithsforum.org.uk or call +44 (0) 207 482 9549.