You’ll remember that, earlier this week, Anthony Cooper found that Norwich PSC had an article on its website that claimed that the function of the Holocaust Educational Trust was:

Even worse, Norwich PSC published a video by an outspoken Holocaust denier, Anthony Lawson. In that video, he claimed:

All over the world Zionists build museums and memorials to their Holocaust and strive to put people in gaol for what is more properly described as historical research but which they call Holocaust denial or revisionism; an attempt to prohibit enquiry into even the more questionable aspects of the alleged events which took place in forced labour camps during the Nazi era.

The webmaster of the Norwich PSC site is Khaled Sa’aran. He also works for Norfolk County Council (Children’s Services. For the previous 17 years, he worked for the Syrian state TV.

This is his response to having been caught out, promoting racist material on the Norwich PSC website:

Norwich PSC announces that the latest 5 hits on our website on the 7th of September came from Tel Aviv and were shortly followed by the usual scandalous accusations of ‘holocust deniel/anti-semitism‘ on some websites and personal blogs, which we believe may be directly linked to these hits. Please check the links below. There was some personal information in addition to offensive remarks about the webmaster published on those websites. The webmaster finds this kind of behaviour offensive.

A clearer link between antisemitism and anti-Zionism would be hard to find. Faced with very clear evidence that the Norwich PSC website promotes Holocaust denial and racist material, Mr Sa’aran’s immediate response is to suggest that the hidden hand of Israel is behind his exposure.

Mr Sa’aran is a very stupid man. The article about his racist website was published on 6 September. I imagine that the hits from Tel Aviv, the next day, were readers investigating the evidence for themselves.

habibi adds: the Lawson video and the ugly attack on the Holocaust Educational Trust have been disappeared from Norwich PSC’s website. Too late, Khaled:

You can still read other items covered in the original post – the racist James Petras on why American Zionists are worse than American Nazis and another article called “Zionism for Dummies”, where Jews are blamed for the Holocaust.

It is no surprise to see Norwich PSC recommending the delirium of conspiracy theorist Peter Eyre, as disseminated by Sameh Habeeb, the hate publisher of the Palestine Telegraph. 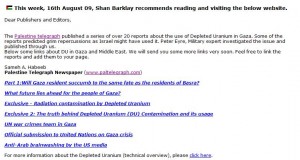