Ted Jeory has found screenshots taken from the web page of Joanne Dickens, the woman who was beaten in the aftermath of the EDL demo, this weekend. 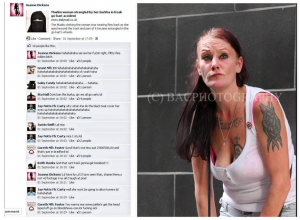 You will see that she has the neo Nazi Cross of Odin tattooed on her left breast.

In case that left you in any doubt, here is a shot from her Facebook page. 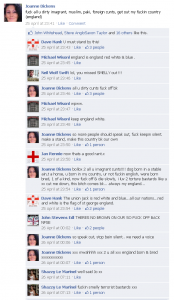 First of all, for those of you out there who argue that the EDL is not a happy home for racists and Nazis: time to shut up.

Secondly, as Ted Jeory asks: could you have brought yourself to kick this woman in the face, on the floor? He concludes:

Those who saved her from worse punishment deserve the biggest applause of the day.

A marked contrast to the two “anti fascists” watched her being beaten, and found it amusing: because she was “a dog”.

[Muslim] [s]tewards even stepped in and helped a female EDL member who fell out of the rogue coach that made its way through Whitechapel.

The woman was assaulted by a passerby after scuffles broke out close to the East London Mosque.

Azad Ali, IFE’s head of community engagement, said: “The volunteers escorted her back to where her coach was. They clearly have ideological differences but these Muslims were willing to protect EDL members from harm.”

If this is an accurate account, we can only hope for more such acts of humanity.

Azad Ali, is of course, the man who praise Al Qaeda’s Anwar Al Awlaki, supported the killing of British soldiers (and lost a libel action over it), and declared his opposition to democracy.

And now he seems to be running “stewards” for the IFE/LMC/ELM.

Don’t you find this disturbing?