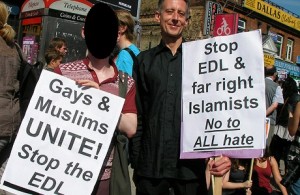 This is a press release from Peter Tatchell

Like many other people, I went to last Saturday’s protest in East London first and foremost to oppose the far right English Defence League and to defend the Muslim community against EDL thuggery.

But I also wanted to stand in solidarity with Muslims who oppose far right Islamists. These fundamentalists threaten and intimidate the Muslim community; especially fellow Muslims who don’t conform to their harsh, intolerant interpretation of Islam. To varying degrees, both the Islamists and the EDL menace Muslim people.

In addition, I wanted to be visible as a gay man, to demonstrate that East London is not and never will be a “Gay-Free Zone” and to show that most lesbian, gay, bisexual and transgender (LGBT) people are not anti-Muslim; that there are LGBTs who want to work in solidarity with Muslim people to oppose all prejudice, discrimination and violence.

To these ends, my human rights campaign colleague [Name removed by request] and I joined the anti-EDL protest, carrying double-sided placards which read on one side: “Stop EDL & far right Islamists. No to ALL hate” and on the other side: “Gays & Muslims UNITE! Stop the EDL”.

We got dirty looks from a small number of left-wing and LGBT anti-EDL protesters, some of whom said explicitly that our placards were “insensitive…provocative…inappropriate…divisive” and that I am “racist…fascist…anti-Muslim.”

There was also hostility from a minority of Muslims who were part of the anti-EDL demonstration, including attempts to snatch and rip my placard. These fanatics mostly objected to the slogan: “Gays & Muslims UNITE! Stop the EDL”. I was surrounded several times throughout the day by angry Muslim youths who ordered me: “You must remove this placard…You can’t walk here with these words…We don’t allow gays in this area…Gays are not permitted here…We don’t have gays in Tower Hamlets.”

When I suggested that LGBT Muslims must also be defended against the EDL, I was told: “Gays can’t be Muslims…We will never accept them (LGBT Muslims)…They can’t come around here…We won’t allow it.”

My response was to engage with these Muslims hotheads and argue against them. The discussions got very heated; at times even menacing and scary. There were moments when I thought I was going to be physically attacked. Thankfully, this did not happen, probably because there were police nearby and, more significantly, because several Muslims intervened to defend my right to be there and to express my viewpoint. Some Muslims even thanked me for joining the anti-EDL protest.

In the course of the arguments, I diffused the hostility of quite a few Muslim critics. I suggested that love and compassion were core Islamic values and that even if Muslims personally disapproved of homosexuality there is nothing in the Qu’ran that sanctions hatred or discrimination against LGBT people. Several eventually agreed that homophobia was wrong. Some shook my hand and parted with a more ‘live and let live’ attitude – a big improvement on their initial response.

This change in attitude as a result of Ashley and I being willing to engage in dialogue was really positive and inspiring. It shows how important and effective such an engagement can be. We need more of it.

Interestingly, there was very little overt, identifiable Muslim hostility to our placard slogan:
“Stop EDL & far right Islamists. No to ALL hate.” There were a few nasty, aggressive looks but that’s all. Indeed, several Muslims indicated that they also oppose the Islamist far right.  They realise that extremist groups like Islam4UK and Hizb ut-Tahrir, which want to establish a religious dictatorship, threaten the human rights of mainstream Muslims. These fundamentalists have a similar bigoted agenda to the EDL and BNP.

Interestingly, there were lots of LGBT protesters against the EDL. But I never saw a single one with a gay badge, placard, t-shirt or rainbow flag. It was as if they’d all gone back in the closet. Why? Normally, on other demos, they always proclaim their LGBT identity. How strange. [Name removed by request] and I were the only visibly gay protesters in the entire anti-EDL demonstration.

The people who called for the anti-EDL protest to be called off were mistaken. In the absence of a visible counter-protest, the EDL would have been able to rally unchallenged and claim a victory. It would have sent the wrong signal if the EDL had been permitted to claim any part of East London as its own.

Saturday’s peaceful protest against the EDL was important because it showed that most of our communities are united in solidarity and that we will not be divided by the hate-mongering of the far right.

What too many anti-fascists refuse to acknowledge is that Islamist fundamentalism mirrors the right-wing ideology of the EDL (and the BNP). In fact, the Islamist goals are much more dangerous. They want to establish a theocratic tyranny, ban trade unions and political parties and deny women equal human rights. They endorse hatred and violence against Jewish, Hindu and LGBT people. Muslims who don’t follow their particular brand of Islam would face severe persecution in their Islamist state. These fanatical sects condone terrorism and the suicide bombing of innocent civilians. Not even the BNP and EDL are this extreme.

The failure of many people on the Left to speak out against Islamist fundamentalism is de facto collusion with extremism and a betrayal of the Muslim majority. It also creates a political vacuum, which the EDL is seeking to exploit and manipulate.

Some anti-fascists argue that we should not condemn the Islamists because this will fuel anti-Muslim sentiment. Wrong. Protesting against the fundamentalists and defending mainstream Muslims is actually the most effective way to undermine Islamophobia.

In the absence of a left-wing critique of the Islamist far right, the EDL is able to pose as the sole critic of Islamist extremism and to mount indiscriminate attacks on the whole Muslim community.

This silence and inaction by many on the left is objectively (albeit unintentionally) colluding with both fundamentalist fanaticism and anti-Muslim prejudice.

To be credible and effective, opponents of the EDL need to be consistent by also taking a stand against right-wing Islamists. Only this way can we offer a principled alternative to the EDL that isolates and targets the extremists without demonising the whole Muslim population.

NB: Unfortunately, Peter Tatchell’s co-protester has received threats as a result of participating in this demonstration. His name and image have been removed.