Well I just got home and I need to write about this now while it’s still fresh.

I started on Jabotinsky and walked with a crowd numbering thousands to Kikar H’Medina and made it damn close to the stage before getting too crushed to move any further forward.

That’s it, that’s the whole thing.

Yeah there were a few speakers and to be honest they were incredibly boring, the student leader Itzik Shmuli has a lisp that made his speech worthy of any National Lampoons spoof, just to make it more poignant he spoke at great length and at great intensity making every attempt to pronounce an S sound all the more cringeworthy, mind you the crowd clearly consisted of nicer people than me as they lapped it up. “We are the new Israelis” is a phrase that I remember cringeworthingly (I know that’s not a real word but hey it’s my blog so don’t make an issue out of it).

So this kid with the lithp finishes and the band the “Yehudim” play a song that ends with the improvised words “Social Justice” tagged on to the end.

By the time the song ended people were already leaving, I was one of them and the streets were flooded with people on their way home after all of 30 minutes of a demonstration and one pop song. Is anyone really surprised that everyone left as soon as they arrived?  The problem with these demonstrations is that no one really has a clue what they are all about. Everyone knows what they want but there aren’t any concrete demands. This isn’t like the demonstrations in the UK years ago that were against the Criminal Justice Bill, they failed and the people in them actually knew what they were doing on the streets. I go to this thing and I have a general idea that it would be nice to be able to afford to buy my own home and own a car, I have no idea what the guy next to me wants.

Ha’aretz have quoted the organiser of the protests, Daphne Leef, as saying;

“Israeli society has reached its red line. This summer we have woken up and refused to continue walking with our eyes closed toward the abyss. We are choosing to see,”

“new hope born out of feelings of despair, the result of almost unbridgeable [social] gaps.”


what on earth does this mean? OK I get it, everyone is pissed off, but there is no call to action on the part of the government. they need to be told in no uncertain terms what to do, otherwise all of this is meaningless.

So it’s pretty clear that loads of people are really unhappy, so unhappy that they are prepared to go on not just one march but several and some of them are even unhappy enough to go live in tents on Rothschild street. But quite frankly, so what? A demonstration that says nothing more than “We want social justice” is saying nothing at all. I want the government to do something to limit the powers of the 19 families who own pretty much everything in Israel and seem to be exacting from me a shekel every time I leave the house. But does anyone else want that? I don’t know, I don’t have a clue what people want except cheaper housing.

the guy who warmed up the crowd started talking about the three apartments Bibi owns and said we all want just to have one, but I don’t want just one, I want loads, doesn’t everyone? Are 400,000 people taking to the streets because Bibi has what we all want?

This was the last big demo I think, the concesus coming from the people I have spoken to is that they are all done with demo’s and having been in London when the whole thing started I gotta confess I am utterly confused as to what it is that’s going on here.

So now it’s 20:40 in Israel and the tent villages that have been erected are mostly all taken down, the only ones remaining are the people who have nowhere else to go.

Is this like a declaration of victory now? What happened to “We shall not be moved?” Everyone is patting themselves on the back for what has, in all honesty been an incredible summer of discontent but isn’t it a bit premature to stop everything before the government even announces a programme of changes? 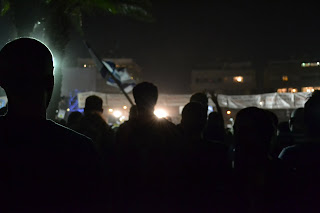