The soloist, Gil Shaham, was about to play Bruch’s violin concerto conducted by Zubin Mehta when some people in the audience began booing and shouting.

Earlier, London’s Evening Standard newspaper reported that the audience would have their bags searched to try to weed out political protesters.

The BBC Proms Team tweeted: “We’re sorry that the concert was taken off air following hall disturbance. Glad both pieces were heard by the audience in the RAH.”

The performance was interrupted at about 19:45 BST and coverage was cut off again an hour later after more protests.

The Palestine Solidarity Campaign had urged people to boycott the concert and called on the BBC to cancel the event.

The worst part of it is the thought of these people celebrating their supposed success tonight.

Any ideas on how to respond (non-violently) to this sort of thing? This isn’t the first time for such a hateful action and I’m afraid it won’t be the last. I fear that Israeli musicians will decide that trying to perform in the UK is more trouble than it’s worth. And the disrupters will consider that a great victory.

“So Israel Philhharmonic back for 2nd half of Prom. Will BBC explain? Real 1930s feel as musicians stopped from performing”

“Wonderful to hear British people shouting “Out, Out, Out” at Proms anti-Jewish hate merchants. What a shaming moment in our cultural history”

“Can’t believe BBC R3 has signed off on Proms disrupted by Israel haters without comment. BNP and other Jew-haters will be proud”

“BBC announce they are playing full broadcast of Israel Phil at #BBCProms on Wednesday aft noon with yobs edited out! Tune in.”

According to the Daily Telegraph,

It is understood the protests were organised by the Palestine Solidarity Campaign. A spokesman was unavailable for comment. 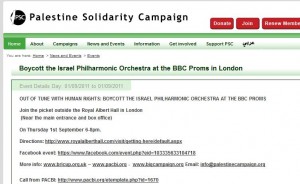 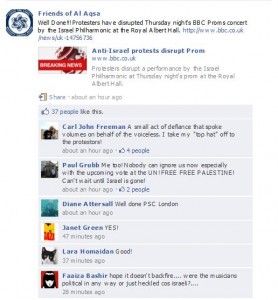