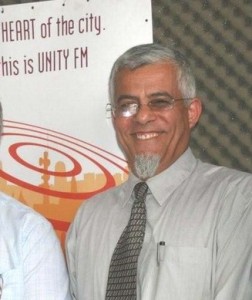 He is the chair of the West Midlands Palestine Solidarity Campaign. 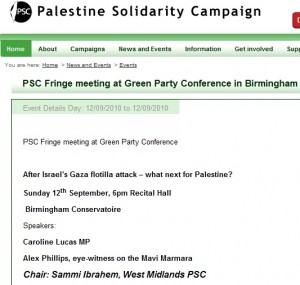 He attended the branch forum of the PSC last year in Oxford, representing the West Midlands. He also runs a website called Shoah.org.uk. The Jewish Chronicle reported last year:

A post on the Shoah website, entitled Happy New Year from Shoah, is signed by Sammi Ibrahem Sr, who describes himself as chair.

Ibrahim cross-posts an article (which also features on former KKK leader David Duke’s website) in which we read:

What else has Ibrahim published?

Ibrahim posts a letter from David Duke, and writes:

i’m aware that d. Duke is Ex-kkk klan member but this is not something i wary about if Duck or any one else want to write to Shoah he is welcome we are open for debate between people’s.

He has published two articles entitled: “Nuremberg – The Crime That Will Not Die” – Part i and Part ii, by the Holocaust denier and Hitler apologist Ernst Zundel. The articles contain nuggets such as:

In other words, the Allies supplied the interrogators, most of them Jews – as some of the victims, who had had a lifetime of experience in dealing with Jews and thus recognized them, have stated. Those of us who are German and can speak German can easily discern the ethnicity of some of the accusers by their mere accents and patterns of speech, even in radio broadcasts and news reels.

Like vile exclamation marks, at the heart of the Nuremberg Tribunal stand certain words: “Genocide” “Gas chamber” “Six million.” These words, and the embedded moral judgment, were derived largely from the admissions and affidavit of one man, Rudolf Hoess, [not to be confused with Rudolf Hess!] the one-time war-time Kommandant at Auschwitz.

and (sick-bag at the ready):

I bow my head in reverence to those who were judicially murdered at Nuremberg. They were the world’s martyrs, not villains. Not one of them would have been condemned to death in a fair trial – not one! They sacrificed an entire nation, and in the end themselves, to save Western civilization. They were defeated by thugs in robes and gangsters in uniform – and by the conspiracies hatched by shysters from the ghettos of Eastern Europe.

There’s this piece by Zundel, about modern Germany:

The German government boasts of being “democratic” when in effect it is despotic. It brags it is the legal successor to the last democratically and properly elected regime, namely the government of Adolf Hitler – when it is plain illegal, a device imposed by the victors on the defeated German nation. It keeps its people genuflecting before its tyrants and defrauders.

Ibrahem posts an interview with David Duke on Russia Today, with the comment:

Obviously, this was a very biased interviewer, but Dr. Duke has received an overwhelming positive response from the appearance! 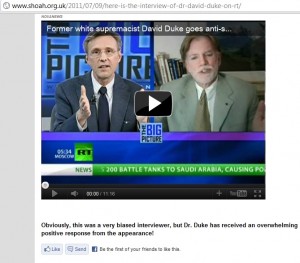 The PSC counts one current Labour MP among its patrons – Jeremy Corbyn.

Many self-styled anti-racists think that the PSC is anti-racist and anti-Nazi. Here is clear evidence that a PSC organiser is pro-Nazi.

I as, Chair of West Midlands Palestine Solidarity campaign would like to correct the facts of this article.

In March the West Midlands PSC discovered some of the postings on the Shoah website were racist and anti-Semitic. The West Midlands PSC, at a specially convened meeting on the 21st of March 2011 removed Sammi from the post of the Chair and I was appointed in his place.

It has come to our notice that West Midlands Palestine Solidarity Campaign material has been appearing on websites which contain anti-Semitic material. We completely dissociate ourselves from these sites and the material they contain and do not want our material posted on them. PSC nationally, and we as the West Midlands Branch of PSC, have a stated commitment to oppose all forms of racism including anti-Semitism.

Some points in response:

1. I can find no announcement from the PSC that Ibrahem had been replaced as Chair of the WMPSC for his antisemitism. This statement appears to be the first acknowledgement by the PSC.

2. The announcement reproduced above does not identity the website carrying the PSC material was Shoah. Nor does it state that Shoah was run by the Chair of the WMPSC

That was a lie. The posting was being made by the Chair of WMPSC.

Why did the PSC imply that the postings had not been made by an officer of WMPSC, when in fact they had been made by Ibrahem, who was replaced as Chair of WMPSC for this very reason?

The PSC is the EDL.