This coming Thursday and Friday, 1st/2nd September 2011, the Centre of Syrian Studies at St. Andrews University is hosting a postgraduate conference on Syria, entitled “Syria in a Changing World“.

The head of the CSS is Raymond Hinnebusch.

This is what he has written about his Centre’s work, and reform in Syria:

The work of the Centre focuses on encouraging scholarship by Syrians about Syria, although non-Syrian scholars of Syria have also been involved. The Centre is an integral part of the University of St. Andrews, and located within the Institute of Middle East and Central Asian Studies. As such, it is a strictly non-partisan, scholarly enterprise. It is open to a variety of viewpoints but we depart from the following consensus that is probably shared by most Syrians and friends of Syria, namely a belief in the need for substantial political and economic reform (notably, the transition to a “social market economy) while defending core values and interests and without jeopardizing stability and security. Syria is undergoing changes for which there is no definitive blueprint on how to proceed and steering such a difficult path is the responsibility of the Syrian government and citizenry. Our centre aims to provide academically sound and politically unbiased knowledge and research that could be useful for Syrians as they chart their course and which would also allow a more balanced view of the country for non-Syrian policymakers and scholars. 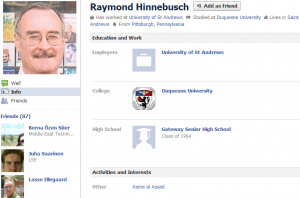