Victory to the Intifada (VTI) is a group created by the Revolutionary Communist Group (RCG), set up in order to protest “Zionism” in various forms, in the UK.

Here is a video of a typical RCG protest outside Marks & Spencer, as part of their Victory to the Intifada campaign:

The person running the VTI campaign is Ethesham Haq. Here he is addressing the Al Quds Day parade:

The Al Quds Day parade in London was a racist hatefest run by hypocrites.

The girl whooping and cheering Haq is Leah Kiernan, an antizionist organiser who joined in the London riots. During the riots, she drank wine looted from a convenience store, called for a “gunshot to the head” to Theresa May, and cheered when she heard Marks and Spencer was on fire, tweeting “burnnn Zionism burnnnn“.

Here is Haq outside Ahava [correction: outside Israeli embassy during protests]: 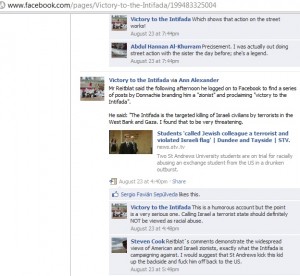 Here’s what Victory to the Intifada says about the Donnachie/Reitblatt incident, in which St Andrews student Paul Donnachie put his hands down his trousers, touched his genitals, then rubbed his hands on Chanan Reitblatt’s Israeli flag.

VTI links to this piece, and then comments:

This is a humorous account but the point is a very serious one. Calling Israel a terrorist state should definitely NOT be viewed as racial abuse.

So the RCG thinks this incident of racial abuse was funny, but not actually racist.