Here is Abdul Wahid, a spokesperson for Hizb-ut-Tahrir, at the Al Quds Day march:

Note Wahid’s open, public support of terrorism, and his call for a large-scale war in the Middle East.

Because as much as I respect, and I truly respect, those brothers who are resistance fighters, making jihad, making life tough for the Israelis and the Zionists, as much as I respect them, they can never liberate that land.  You can’t take the army, which is a nation’s army, a terrorist nation’s army, and defeat it with sincere small fighters. It needs one of those states, some of those states, around to release their armies to liberate that land and then truly, by Allah truly, then that region will see peace like it had in the past. Because never be ashamed of this.  The only time that land has seen peace between Muslim, Christian, Jew, living side by side, you ask these rabbis here [Neturei Karta], the only time was when sincere Islamic rulers ruled with justice.

In this, Wahid is echoing his fellow Hizb Taji Mustafa at another Al Quds day march.

From 6:13, however, it is clear that Wahid is only addressing Muslims:

“on the day of judgement, your presence here today will count in your favour, and those who stayed at home, and who didn’t speak out, they will have to answer for that. And I pray you’ll come next year! And every year, until we see this land liberated.

There were perhaps 300 people on the Al Quds Day march, if that. Some of these were middle class, white students like Maev McDaid, Lucas Slothuus and Leah Kiernan.

Let’s say there were 200 Muslims on the march. There are approximately 700,000 Muslims in London.

That means, according to the Al Quds Day protesters, 699,800 Muslims will have to answer Allah, for not turning up to a racist hatefest run by hypocrites, and not vocally demanding the death of an entire nation. 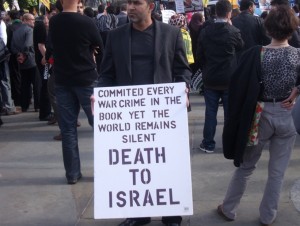