This is Leah Kiernan, known on Twitter as @leah5star: 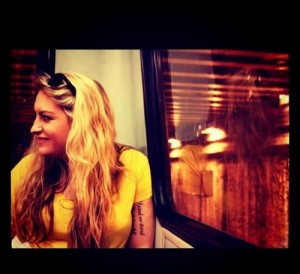 (on the right here): 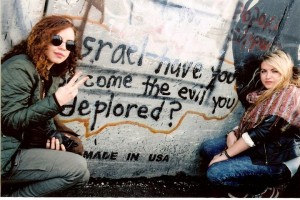 Leah Kiernan was at the Al Quds day rally in London this past weekend, where she filmed a video of antizionist activist Ethesham Haq, from a group called Victory to the Intifada, saying why people should boycott the “Zionist” Marks and Spencer:

This is the kind of filth, that Kiernan promotes on the internet.

Kiernan has been busy recently. As well as attending the Al Quds day march on Saturday, she also organised the protests outside Israel’s embassy last Friday, in the aftermath of the murders in Eilat and Israel’s response.

According to her blog (“Fxck the State”), she is a Sociology student at Goldsmiths’. Her student union president at Goldsmith, James Haywood, wants to”stop universities from working“. Haywood tweets about Leah Kiernan:

Big up to @leah5star for organising the Israeli Embassy demo yesterday in London, more needed by the looks of things #gaza

Like Jody McIntyre, she shares a hatred of Israel and of UK “feds”.

She posts a video, of her and her friends laughing at police:

Her video comes with the tagline:

Pigs get shown about common law! They don’t know what they’re doing!

Kiernan was an active participant in, and promoter of, the London riots.

She tweeted on August 7th:

Here are some of her tweets from August 8th.

On Marks and Spencers being burned down in Brixton: 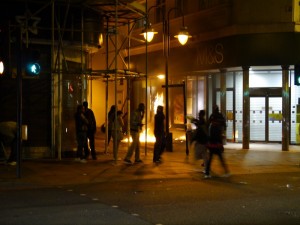 In response she writes:

Surely, if your politics are so extreme you rejoice if anything bad happens to a shop you think is “Zionist”, that’s pretty worrying.

Burning banks and betting shops, looting Zionist Marks & Spencers has political motivation. Everything else in #LondonRiots sadly does not.

Why haven’t the banks been set on fire when primarily it makes sense for them to be? Protect your community smash the state #LondonRiots

After boasting to Twitter followers that she is going out dressed in all black, Kiernan begins tweeting about her involvement in the riots:

Behind mare street. Big fire. Riot police charging towards us. Pigs on horses

This is what she was up to in Clarence Road.

She posts this photo:

On Home Secretary Theresa May:

Theresa may- gunshot to the head.

Here are some tweets of Kiernan from August 9th.

when the riots have died down, ur gona look at ur area and fink damn..

@jackiieeee_ nah I won’t. I don’t care about shops. I will look around and think “fuck yeahh”

@Micasso81 I’m in clapham.. Yeah and what if they rob out t mobile. Good luck to them!

I have work at 6.30am. This is a joke. Please go to holborn and loot up de placeeeeee haha

Leah Kiernan, organiser of protests outside of the Israeli embassy this past week.

‘Sittin on the toilet at work and spotted this LOL‘.

Following a £100-million refit, this prestigious department store now boasts six tiers of curved glass balconies… It’s all given Peter Jones a very exclusive, more chic appeal which is only fitting for the modish streets of Mayfair.

Just the sort of place you’d expect someone who supports rioting, vandalism, and looting to work…

Analysts said the violence put people off visiting their local shopping centres with stores closing early to avoid being targeted. The Experian Retail Footfall Index said shopper numbers were down 4% in the week to Sunday 14 August, compared with the same week a year ago.

Trading at John Lewis’s London stores was affected, with sales at its Oxford Street shop down 3.6% and Peter Jones in Chelsea off 4.5%.

Talk about biting the hand that feeds.