The Jewish Chronicle reports that a St Andrews student has been expelled after being convicted of racially aggravated breach of the peace against a Jewish student. Another has been suspended for a year – pending further investigation – after a verdict of not proven (equivalent to not guilty under Scots law) was returned.

I had my doubts when similar charges were raised against SPSC members following the disruption of a preformance by the Jerusalem Quartet at the 2008 Edinburgh International Festival. As gratuitously nasty as their conduct was, the leap from mere breach of the peace to racial aggravation seemed too great: with or without the involvement of SPSC members and purveyors of antisemitic imagery, Mick Napier and John Wight.

The Proculator Fiscal thought so, and charges were dropped.

In this case, however, the tipping point appears to be extreme drunkeness at the time, invasion of the victim’s personal rooms and explicit reference to the his Jewishness rather than Israeliness. The Courier carries details of their actions.

Samuel Colchester [acquitted and suspended] and Paul Donnachie [convicted and expelled] are charged with fondling their genitals before rubbing their hands on a flag of Israel. It is claimed they were intending to cause “alarm or distress” to Jewish man Chanan Roziel Reitblat.

Colchester (20), of Andrew Melville Hall, and 18-year-old Donnachie, of McIntosh Hall, both deny the allegations.

Colchester and Donnachie face a charge alleging that, on March 12 at a building owned by the university in Links Crescent, they acted in a racially aggravated manner intended to cause alarm or distress to Mr Reitblat.

The charge states they placed their hands inside their trousers and on to their genitals before rubbing them on to a flag of Israel. It is also alleged they made comments of an offensive nature within Mr Reitblat’s presence, contrary to the Criminal Law Act.

An alternative charge states the pair behaved in a threatening or abusive manner likely to cause a reasonable person to suffer fear or alarm by acting in the manner described, contrary to the Criminal Justice Act.

The Elder of Ziyon reproduces an e-mail sent by Reitblat:

[…] that I support terrorists and should be held liable for putting up a “terrorist symbol” in my room- pretty much that I deserve what’s coming to me.

After they left my room, they went on an hour long rant throughout the hall about how Jews have no claim to Israel and that Israel is a terrorist, Nazi state.

At the time, Donnachie is shown to have been bullish on his Facebook feed: 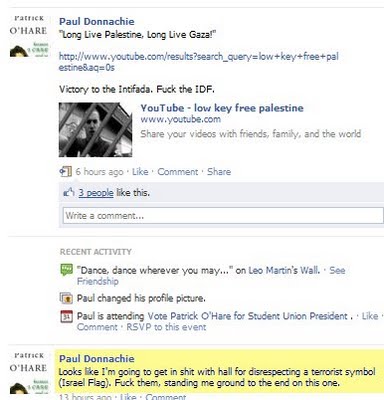 Bet he is not so cocky now. And that he wishes he had not sacked his solicitor, unlike Colchester.

Donnachie, who is a member of the SPSC has announced that he is appealing (cue chorus, oh no he’s not!).

Update: I am informed in the comments that a  Justice for Paul Donnachie Facebook group has been set-up.

Wall-posts thus far include the standard Nazi calumny that Ashkenazim are unauthentic Jews, crypto-Khazars which meets with the Group administrator’s stated approval: 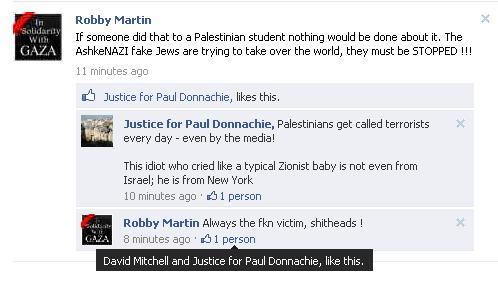 Further down, another list-member calls Reitblat a “faggot” which escapes comment by the group administration, who prefers to wish some form of retribution on the staff at St Andrews. Given the context, it does not appear unreasonable to construe a wish for violence: 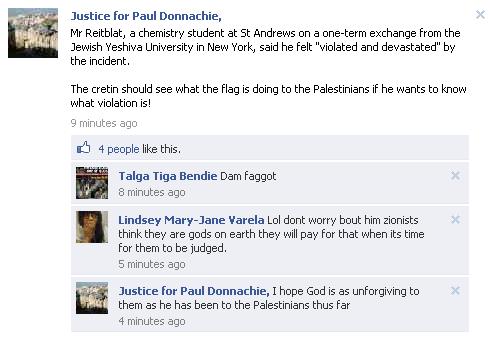