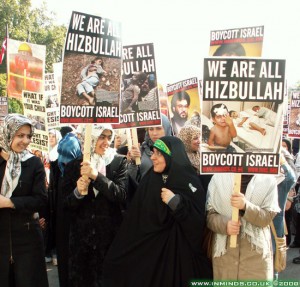 An image from Al Quds Day in London. “We are all Hezbollah” is the main slogan of the hate march.

“Al Quds Day” (Jerusalem Day) is the annual Israel hatred march organised by the Khomeinists of the self-styled Islamic Human Rights Commission (IHRC). It will go ahead in central London this afternoon. The EDL thugs may show up too. If they do, it is to be hoped that the Met contains them robustly.

This post takes a look at the supporters of the march and just what they are backing.

The Far Left and Islamist Groups
On Friday Gene noted that the “Socialist Unity” blog is promoting Al Quds Day.

Here’s the top of the Socialist Unity post. Mark the “under occupation for over 63 years” line. In other words, Israel’s mere existence constitutes “occupation”. (Click to enlarge.)

The Palestine Solidarity Campaign has also advertised the march.

Who else backs Al Quds Day? The IHRC claim several groups are “supporting organisations”, including the Muslim Council of Britain and the Islamic Forum of Europe. This is the list:

Scenes From Quds Day
This is what they are backing. Have a look at these scenes from last year’s march. Iranian opponents of the regime in Tehran are abused with shouts of “we are all Hezbollah” and “marg bar Mousavi” (“death to Mousavi”).

One of the IHRC goons, Raza Kazim, was so infuriated by the counter-demonstrators that he decided to order the police around:

The Speakers
This year the Quds Day speakers include:

– RePressTV presenter and Hamas funder Yvonne Ridley. She has defended Al Qaeda terrorist Musab Al-Zarqawi and called mass murderer Shamil Basayev a “martyr” and a ”fearless Chechen commander” who “led an admirable struggle”. She has warmed up for this year’s march with a Jews, sorry, “Zionists” buy politicians slur:

– Lauren Booth, another RePress TV presenter and Hamas supporter. Of late she has developed a taste for promoting disgusting antisemites such as Mahathir Mohamad and Gilad Atzmon.

– John Rees, the far left stopper and supporter of the murderers of British troops on active duty overseas.

– Les Levidow from “Jews Against Zionism”, another handy fig leaf. This is not his first Al Quds Day outing. He says the Israeli state itself is “occupation” and it should be ended.

Ideological Background
For more on the poisonous ideology behind the march, see the dedicated Al Quds page on the IHRC’s website. It takes readers to “resources” like this:

The greatest evil facing the Muslim community (Ummah)and mankind today is not AIDS, Pollution, or Nuclear War. It is international Zionism. It is the Zionist greed for wealth, lust for perverted sex, greed for power, domination, and economic exploitation that is causing AIDS, POLLUTION as well as threatening NUCLEAR WAR.

Zionist are behind every evil and conflict in the world today. Whether it is political, economical, social or moral.

This is an Iranian website, so its authors don’t worry about dropping the rhetorical “I am just talking about Zionists” shield and getting straight to the point – eternal cosmic hatred:

This same Yahud (i.e. Jews) tried to destroy the Holy Prophet (SAW) and his followers in Medina.

Today this Zionist are doing their utmost to destroy`Masjidu’l-Aqsa’ (Muslim’s first Qibla). Their aim is to conquer all Muslim lands and grab the oil resources and destroy Islam completely. Because Islam is a challenge to their evil schemes and exposes them.

IHRC Support for Terrorists
Now Israel is not the only issue for the IHRC, nor is Hezbollah the only terrorist group it backs. It also openly and explicitly supports suspected and convicted terrorists in the US and the UK. Here is the latest example.

IHRC has endeavoured to provide support and legal aid to prisoners such as these with its Prisoners of Faith campaign since 1997. This campaign highlights the extraordinary suffering that hundreds of thousands of Muslims endure because of their faith. It has also campaigned extensively for Muslims imprisoned because of their political beliefs and activism.

Eid is an ideal time to write to these prisoners, and remind them that Allah’s mercy encompasses all, and that they should never lose hope of His mercy for His servants. We should not underestimate the worth of the words we write to uplift and cheer up those in low spirits.

IHRC is appealing to you today, as campaigners and supporters of the oppressed, to support these prisoners by sending them cards with messages of support and comfort this Eid. This kind gesture will raise their spirits and offer them warm words of encouragement so that they know that we have not forgotten them and that we remember them in our prayers.

One of the IHRC’s “prisoners of faith” is Omar Abdel Rahman, the spiritual leader of the New York bombing plotters of the early 1990s. He was convicted in 1995 and sentenced to life in prison, with these words from the judge in the case:

“You were convicted of directing others to perform acts which, if accomplished, would have resulted in the murder of hundreds if not thousands of people,” the judge said in a packed, heavily guarded courtroom. The bombs that Mr. Abdel Rahman and the others had planned to detonate, Judge Mukasey said, would have caused destruction on a scale “not seen since the Civil War” and would have made the related 1993 bombing of the World Trade Center “seem insignificant.”

This brought an extraordinary jihadi, sorry, “activist” career to an end:

Last October, culminating a nearly nine-month trial, a Federal jury convicted Mr. Abdel Rahman and the nine others of planning to wage a “war of urban terrorism” against America, whose central element was to have been a cataclysmic day of terror in and around New York City: five bombs that were to blow up the United Nations Building, the Lincoln and Holland Tunnels, the George Washington Bridge and the main Federal office building in Manhattan.

The prosecution charged that the bombing of the World Trade Center, which killed six people, was also part of the conspiracy, although neither Mr. Abdel Rahman nor his co-defendants were accused of helping to carry out that attack.

But prosecutors said the four men convicted in the Trade Center bombing in an earlier trial, and two more who are awaiting trial in the bombing, were co-conspirators with the cleric and the other men.

What a “prisoner of faith” to pray for! In fact, he is one of the IHRC’s favourites.

Or try the reaction of the head of the IHRC, Massoud Shadjareh, to the conviction of Abu Hamza for inciting racial hatred and soliciting murder:

The Rot Reaches Parliament
Never to be forgotten in IHRC affairs is Jeremy Corbyn, the Labour MP for Hamas and Hezbollah.

I like the way it [the IHRC] works, I like the sense of values surrounding it, and I’ve found them extremely helpful in bringing cases to my attention of individual abuses of human rights that they’re concerned about. But also general issues concerning the rights of people in the Middle East. The situation in Iraq and Afghanistan. And I’ve found them generally extremely helpful, extremely positive, and help to challenge the notion that human rights is somehow or other something based on Romano-Christian law and based on Europe rather than the rest of the world.