Does Socialist Unity even care any more about whom and what they promote?

A link in SU’s post takes you to a web page with links to quotes from Ayatollah Khomeini, the founder of the Islamic Republic of Iran, denouncing Israel, Zionism and America’s support for them. Al Quds Day was the brainchild of Khomeini

According to the late Ayatollah Hoseinali Montazeri, who was once the designated successor to Khomeini as supreme leader but who later denounced the brutality of the Iranian regime, Khomeini personally ordered the mass execution of all political prisoners before his death in July 1989.

According to figures and estimates by Iranian dissidents, between 6.000 to 15.000 prisoners of both sexes, most of them leftists, with members of the Baghdad-based, Iraqi trained, financed and supported Mujahedeen Khalq Organisation (MKO) making the majority of them, were executed summarily in Iranian prisons in less than two weeks.
…..
“The verdict for apostate is execution. Destroy enemies of Islam immediately. The soonest sentences are carried out the better”, Ayatollah Khomeini tells his son, Hojjatoleslam Ahmad, who had asked him few questions on behalf of the then Supreme Council of Judiciary, Ayatollah Musavi Ardebili.

Pictures of Khomeini (and of course Hezbollah flags) are a feature of the IHRC’s Al Quds Day demonstrations in London. 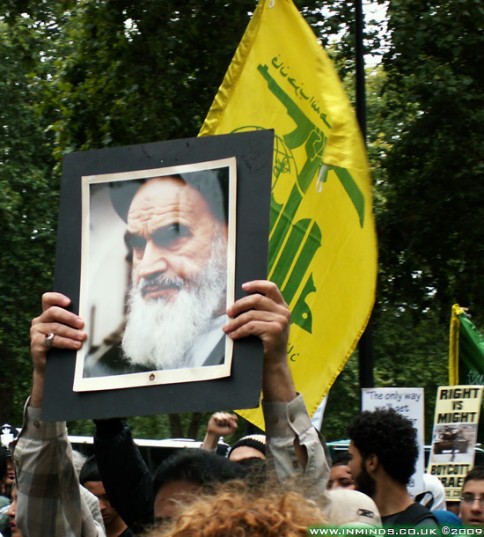